The Best Diet to Get Ripped As Fast As Possible

I want to tackle a really interesting question I got from a Burn the Fat Blog subscriber recently. It’s about the best way to get ripped as fast as possible, doing whatever it takes (naturally), with no allowance for failure; no margin for error, no time to lose and the clincher – without losing muscle. 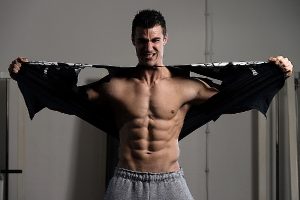 It’s not the first time I’ve received a question on this topic (maximum, rapid fat loss), but I never heard the question phrased quite like this before. Here’s what he wrote, and my answer is below:

Q: Hey Tom, I’m not going to get into details, but I have some major motivation to finally get ripped before the end of the summer when I turn 40.  I wouldn’t say I’m really that fat, but I’ve never come close to seeing my abs. I know there are so many diets out there and you’ll say, ‘any diet can work if there’s a calorie deficit and you can stick with it,’ but I have a serious question: If you had to lose fat fast no matter what, what would be the best way to get ripped as fast as possible, without losing muscle? I’m talking like, I absolutely, positively, cannot fail, like ‘gun to the head – get ripped or die.’ And, I’m willing to do whatever it takes. If you were in this situation, what would you do?”

A: Wow, that sounds like some serious motivation. Okay, I understand what you’re asking. I believe the answer is so simple, that when I say it, you’ll be wondering, “That’s it?”

The most effective diet for getting absolutely shredded, fast, without a chance of failing (assuming full compliance), is… (drum roll)…

Obviously, there’s more to it than that. But if I wanted to be certain I got ripped I would put the primary focus on those two food groups and every other consideration would be secondary.

For vegetables, I’m referring specifically to the fibrous veggies. That’s almost all the greens such as broccoli, asparagus, green beans, spinach, brussels sprouts, salad greens, cucumbers, celery and so on (don’t worry, I would never ask you to eat that disgusting kale).  It would also include all other non-starchy vegetables of all colors, like cauliflower, bell peppers, zucchini, mushrooms, onions, tomatoes, and so on.

A lot of competitive bodybuilders eat this way, sometimes with considerably more healthy carbs like sweet potatoes and oats and rice and some fruit too. But again, the MAIN FOCUS is protein and vegetables.

There would be a couple other important guidelines: I would keep the protein very high, well above the standard 1 gram per pound of bodyweight protein rule that most people follow. I’d be aiming for more like 1.2 to 1.3 grams per pound, possibly even 1.4 to 1.5.

I know. That’s a very, very high protein diet.  (Note: this is for someone already average or leaner body fat and wanting to get ripped. You wouldn’t prescribe grams per pound of total bodyweight for someone overweight or obese. That much protein would be total overkill).

Small or moderate amounts of healthy fats would also be included, within the calorie limits, but the diet would not be high fat. (sorry keto).

Another thing I’d do is eat five times a day and make sure that protein is spread fairly evenly in each meal.  (Bare minimum of four protein intakes a day).

An important note to remember is that the old idea of eating more often to boost metabolism has been disproven. Yet the most cutting-edge protein research says it is still better to eat often if you want to optimize your protein consumption and muscle protein synthesis.

Why would protein plus veggies work so well? Several reasons.

1. Protein has the highest thermic effect of food by a huge margin. Some people think you get a metabolic advantage by eating low carb, and this diet would be low carb, but the truth is, it’s the high protein that gives you the advantage.

2. All that protein would suppress appetite or provide satiety.

4. All those veggies would keep it healthy, compared to nothing but an all protein diet which would be even more extreme and lacking fiber and micro-nutrients.

Now, here’s the problem (that I freely admit… and warn of):  Eating just protein and veggies is a pretty extreme diet.

This is restrictive. This is a diet, not a lifestyle.

If you don’t include any starchy carbs or whole grains at all, this diet wouldn’t be a whole lot of fun, unless you’re one heck of a great protein and veggie chef. Even then, it would still be a drag. But this hypothetical situation, “get fully ripped quick or die” calls for something hardcore.

If a person wanted to soften this up a bit, he or she would simply include a bit of starchy carbs from single-ingredient, unprocessed sources like oatmeal, sweet potato, white potato and brown rice, but only as much as fits while keeping an aggressive calorie deficit (like 30% below maintenance or so).

It would also be sensible, instead of only eating veggies with every meal, to include a little bit of fruit, especially high fiber, lower calorie fruits. (Now it’s starting to sound a lot like Burn the Fat, Feed the Muscle, eh?)

If someone wanted to be even more flexible, thinking more about long-term happiness and sustainability, here’s what they would do: Allow the wider variety of unprocessed foods, including the natural starches, whole grains and the fruits, but still keep the mental focus on “Eat more protein and vegetables.”

Countless diets fill pages with lists of all the foods you can’t eat, but even when we’re restricting some foods, it’s often better for us mentally, if instead we create some guidelines for what you should eat, not giving so much mental space to what’s forbidden.

The main lesson to learn

That one directive will help anyone, whether you’re going for hardcore fat loss or following the more preferred, less restrictive lifestyle approach of the Burn the Fat, Feed the Muscle principles.

To wrap up, here’s my disclaimer: I’m not necessarily recommending ONLY protein and vegetables, I was just answering a hypothetical question today: what is the best way to get ripped as fast as possible?

But remember, “Protein and vegetables.” No matter what your fat loss goals, keep your primary focus on that. Don’t fall short there, and you’ll get better and faster fat loss results.

Another way of looking at it is that I’m suggesting you focus on getting your protein and veggies FIRST. With whatever appetite you have left, and while keeping within your calorie deficit limit you have left, then go ahead and add more starchy carbs or whole grains.

Believe me, I’m not trying to take all your carbs away (I happen to love carbs). But if you eat a whole bowl of pasta, or a big basket of bread, or even a pile of potatoes before you’ve even gotten your protein and veggies in, you’re making a huge mistake from a maximum fat loss perspective. I hope that makes sense.

PS. On top of my disclaimer above, I recommend that relative beginners (or anyone who is still in the “confusion stage” about what to eat) master the fat loss fundamentals first before thinking about advanced (extreme) strategies like this one above. A great way to learn fat loss fundamentals is to read my Burn the Fat, Feed the Muscle book. (You can also listen to it now with the audiobook edition).  my newest 7-day Burn the Fat quick start program. You get instant access to this online course the moment you join our Burn the Fat, Feed the Muscle Inner Circle:

Not A Burn The Fat Inner Circle Member Yet? Click Here To Join Now