Starvation Mode Revisited: Is This The Cause of Slow Fat Loss, Frustrating Plateaus And Weight Re-Gain?

Is “starvation mode” the cause of frustrating fat loss plateaus? Is this what makes it so easy to gain back all the fat you lost (and sometimes more?)  Is this the same as metabolic damage? When I first got into bodybuilding and fitness many years ago, almost all the fat loss experts said, “Yes! Starvation mode is real and it’s something to watch out for!” But if you do a Google search for “starvation mode” today, I bet you’ll find that 9 out of 10 “authority” articles will say starvation mode is a myth. New research continues to confirm that what many people call starvation mode was real all along. The evidence is convincing, there has simply been a huge misunderstanding about what starvation mode really is. Combined with what’s going on in both the mainstream weight loss world and in the physique competition world today, that makes revisiting this subject, in detail, more important than ever… 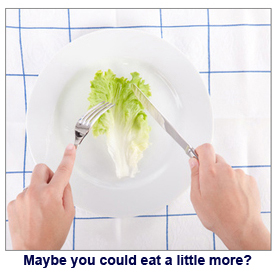 The other findings, which reflect years of accumulated study, combined with the most recent research, include:

Having read and understood this punch list of science-supported facts, you now know more about the starvation response than 90% of the top diet and fitness experts in the world. And this list, though it does sound worrisome, is exactly what points us to the solutions to this problem.
The alarming trend in physique sports: bodybuilding, physique, figure and bikini competition
Solutions are needed now more than ever, because more people are crash dieting and over-exercising while starving themselves than ever before. Concerns are now coming from two different communities: the mainstream diet world as well as the physique competition world. In the last year alone, more articles, videos and podcasts about metabolic damage in physique sports have been published than I’ve ever seen before.
Metabolic damage, like starvation mode, is not a formal scientific term. But it’s not difficult to be convinced that metabolic damage is also real. It happens when your metabolism is already not running at peak efficiency due to chronic dieting, and instead of eating more, cycling into a phase of less intense training and recovering (or into a hypercaloric muscle-building phase), the athletes continues to drive themselves harder to lose. They eat even less and train even more. The metabolic decline reaches the point where it is legitimately hidering further fat loss and it lingers even after the diet ends.
Metabolic damage then could be defined as serious metabolic adaptation and the (extended beyond normal) lag time between the time the diet ends and when metabolism gets back to normal.
Some trainers believe this is reaching “epidemic proportions,” especially in women’s physique sports. Although the research on how metabolic adaptation and metabolic damage affect women is sparse, it is not a stretch to believe that it hits women more than men. That’s especially true when you combine that with the fact that the average woman burns/requires a third fewer calories than the average male.
The irony is that many trainers, nutritionists and contest prep coaches are the responsible parties, as they are the ones prescribing the starvation diets. Many of these coaches, sadly, will only accept half of the picture – that their clients are non-compliant, because they are among those who aren’t educated about metabolic adaptation and how to minimize it, or they’re not thinking about the long term consequences, only the current show prep. So what do they do next? They prescribe even more cardio and even fewer calories, and a vicious cycle begins.
What to do about it
I can’t tell you how to turn off your body’s starvation responses because they can’t be turned off. This is your body’s automatic reaction to calorie restriction.
Some people have translated that to, “My body hates me!” On the other hand, we could easily say, “Your body loves you” … you’re just not loving it back – you’re abusing it. Remember, this is a protective mechanism. Without some kind of weight regulation system, very small perturbations in energy balance would cause huge gains or losses in body weight much more quickly because almost no one eats precisely in energy balance every single day. We would also not last very long in a food shortage. With these amazing feedback systems we have, our bodies are incredibly resilient.
What I can do, and will write about in more detail in the future, is tell you how to mitigate the effects of metabolic adaptation, avoid the consequences of metabolic damage and recover if it has already happened to you. Perk up – it’s not permanent.
Just so I don’t leave you on a huge cliffhanger, let me say that the crux of the solution should already be self-evident: Don’t starve yourself on crash diets, don’t over-exercise if you choose a very low calorie diet approach and above all else don’t diet chronically. Instead,  learn the secret of smart bobyduilders and fitness models: dieting in cycles and seasons, including muscle-building phases.
Many people are failing on all the above. There are still lots of regular people going on self-prescribed 800, or even 500 calorie day diets. Are you kidding? My right bicep needs more than 500 calories a day! There are also male and female physique athletes dieting on 1600 or 1000 calories per day, respectively… with competition level training! That’s insanity!
Summing up

When you’re compliant to a low calorie (hypocaloric) diet, you’re going to lose weight. If you got a nutrition education in the process and you can ease into the lifestyle phase with a smart maintenance plan, you’ll be able to keep it off. But make no mistake, cut calories too much, for too long, and bad stuff happens, including losing the wrong kind of weight (muscle) and increased risk of regaining what you lost. Being impatient and using quick fixes has consequences, and a great danger is that many of them don’t show up immediately.
Make training a part of your lifestyle, and train sensibly, but train hard. This allows you to eat more, and when you resistance train, more of what you eat is likely to be partitioned into muscle and not fat. That’s the difference between transforming your body and simply losing weight, and this is the message I have preached for the last decade in Burn the Fat, Feed the Muscle.
References:
Adaptive thermogenesis in human body weight regulation: more of a concept than a measurable entity? Dulloo AG, Jacquet J, et al. University of Fribourg, Switzerland.  Obesity Reviews, 13 (supp2) 105-121, December 2012
Postscript: I know this was a long post (you might want to call it “epic”), but one more thing… I  realized after the fact that there is more than one myth about starvation mode and it’s VITAL to finish making sure I’ve mentioned all three:
Myth #1 (already discussed in this post), was that starvation mode means if you go on  VLCD, your metabolism will slow down so much that you reach energy equilibrium at a very low calorie level and at that point, your weight loss will stop completely  (false).
Myth #2 is that the starvation responses affect each person equally (false). There’s a genetic component, it probably affects women more than men, and starting body fat level is a hugely important variable.  Obese people can tolerate much larger calorie deficits with much less risk than lean people.
Myth #3 Is that these starvation responses are acute (false). Remember, this discussion has all been in the context of restrictive chronic dieting and the negative side effects that may bring, including metabolic adaptation. We are not talking about “missing one meal and going into starvation mode” (so anyone who makes a strawman out of that in the comments below will be publicly flogged, LOL :-) )
Tom Venuto, author of:
Burn the Fat Feed the Muscle
Founder & CEO:
Burn the Fat Inner Circle
Copyright Burn the Fat Publishing/ Burn the Fat Blog. Do not copy
Related:
Calorie restriction for life extension… or starving for life?
https://www.burnthefatblog.com/archives/2009/04/calorie-restriction-for-life-extension-dr-oz-on-oprah.php
Can too much cardio decrease your metabolism?
https://www.burnthefatblog.com/archives/2011/04/cardio-and-metabolism.php
The truth about slow and fast metabolisms:
http://www.burnthefat.com/slow-metabolism-problems.html
How Bodybuilders and Fitness Models get so lean and muscular
http://www.burnthefat.com/bodybuilders_fitness_models_fat_loss_secret.html