The New (Ultra-Simple) Way To Calculate Your Macros In 2020 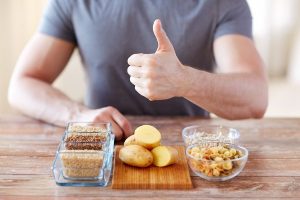 You  can use the classic percentage method for setting macros, and yes it still works. But knowing which percentage to choose for your goals and circumstances (without a coach) is easier said than done.

Having a simpler method for setting your macros is helpful because crunching these nutrition numbers is one of the first steps in meal planning where many people get confused and frustrated.

The new way is ultra-simple, it puts nutritional priorities first and it’s customized just for you. It’s called the “protein-first” method is an alternative way to set your macronutrients that many nutrition coaches are starting to use and embrace because of its simplicity.

The protein first method bypasses confusion and virtually guarantees your grams of protein, carbs and fat fall into a well-balanced and healthy range, near the ideal amounts for improving body composition. These macros will suit every healthy, active person, as long as they don’t have special or unusual needs or dietary requirements.

We are assuming that you already know how many calories you need to eat and you’ve properly calculated that number beforehand.

The root of the word protein comes from the Greek, meaning “of first importance.” That is literally true because protein intake assists with fat loss in ways that carbs and fat do not.

Protein has the highest thermic effect and is the most appetite-suppressing macro. Protein also helps you retain your lean body mass when you’re in a calorie deficit.

If you get your protein and calories right, you’re actually 90% of the way there with your nutrition numbers, because those are the two biggest priorities for fat loss.

Because protein is so important, it pays to prescribe it with care and be sure about it. To set a truly customized protein goal that’s right for you, it’s ideal to set your protein target based on grams of bodyweight. This way, the protein target is relative to your body size.

Bodybuilders, who are some of the leanest and muscular people on earth, have had a long-standing rule for protein intake: Eat 1 gram per pound of bodyweight.

This comes very close to what the research says, which is 0.8 to 1.0 grams per pound, while also allowing a small margin for error (better to be on the slightly too high side than the too low side when it comes to protein).
A 195 pound bodybuilder then, would eat 195 grams of protein per day.

This formula couldn’t be simpler or easier to remember. Some eat a little more protein, some eat a little less protein, but for people who lift weights and are fairly lean, this rule of thumb has stood the test of time in research and in practice. (Note: Resistance training increases protein needs and we are making the assumption that everyone using this protein formula is lifting weights).

The problem is, what if you’re not already lean, like a bodybuilder or athlete? What if you’re currently overweight? That’s a good question, because if you weigh 195 pounds but you want to weigh 145 pounds, (and you’re not a bodybuilder), do you really need 195 grams of protein? You don’t, and that’s because you don’t need additional protein to support body fat tissue.

For anyone overweight, it makes more sense to set protein based on lean body mass. Even that idea doesn’t always pan out because not everyone knows their lean body mass, and even if you do, you must be certain your body fat test was accurate because your protein goal will only be as accurate as your lean body mass calculation.

For people with weight loss goals who have high body fat or significant weight to lose, the simple alternative is to base your daily protein intake on your goal body weight. If you’re 195 pounds and you consider yourself overweight, and if your goal weight is 145 pounds, then you eat 145 grams of protein.

As you can see, the protein formulas are different for overweight people and lean people who want to get even leaner (bodybuilders, etc), but they’re both ultra simple and easy to remember.

In peer-reviewed nutrition science, there’s something called the acceptable macronutrient distribution range (AMDR) and for fat, that’s anywhere between 20% and 35% of total calories.

In the fitness community, where controlling calories, cutting body fat and improving body composition are prioritizes, guidelines are similar. The most common recommendation is 15% to 30% fat. You can customize within this range based on your goals and preferences.

Some people aim for the lower end, setting 15% as their target, because they’d prefer to leave room for more carbs. Other people prefer to set their fat higher, usually because they prefer the opposite – fewer carbs and more healthy higher fat foods (avocado, nuts, nut butters, whole eggs, olive oil, and so on).

People who are brand new to macros and meal planning may not have a preference yet, so an easy place to start is in the middle with 20 or 25% of total calories from fat.

That’s all there is to it, and here’s what the tally looks like so far:

Step 3: Carb Grams Are Set Automatically Based On What’s Left

The last macro to set is carbs. Actually, using this new system, the carbs have already set themselves! The carbs are what’s left after protein and fat. Told you it was simple.

Once you know your calorie and macro targets in grams, you’re ready to create a daily meal plan that fits those numbers. (learn how here)

What about those macro percentages (ratios?)

Your macros can be set up by grams, percentages or both. The classic system uses all macro percentages.

We introduced a new system here, the protein-first method, and we did that because it’s more likely to nail down your correct protein intake. Most of all, it’s simpler, so beginners are less likely to make mistakes in choosing the numbers. It also takes your starting body composition into consideration.

We did use a macro percentage to help you find your fat intake, but aside from that, we’ve been talking in terms of grams not percentages. Once you have your gram numbers, if you’re still curious about what the macro ratios come out to, you can do that calculation as well:

For most people starting a fat loss plan, the macro targets are 30 to 35% protein (occasionally higher in strict, lower calorie diets), 20 to 30% fat and 40 to 50% carbs. Using the protein-first method, you can see in our example, that’s exactly where the macros fell.

The best part is, when you use this method, as long as you did your calorie calculations right first, your macro numbers are customized specifically for you.

What if you want more protein?

One gram per pound typically covers all bases, including a margin for error and including protein needs for training. However, there’s some evidence that protein intakes in the 1.1 to 1.3 grams per pound range can help retain lean body mass during strict low calorie diets (like prepping for physique competitions). Some people, especially bodybuilders, simply like to eat more protein as a personal preference.

Since research suggests there’s no harm or down side in going higher in protein, if you want to eat more protein, that’s your choice. Simply customize your own protein gram amount as you see fit and then follow the rest of this system as explained above. Your carbs (or fat) will simply end up a little lower to make room for those extra protein calories.

What if you want less carbs or more fat? What about low carb diets?

The most important thing to know is that carb intake and fat intake are highly customizable and hitting a specific number for carbs or fat doesn’t matter as much as it does for calories and protein.

Using the protein first system, you have quite a bit of room to personalize your carb and fat intake.

However, as I mentioned above, this is a general macro formula designed to work for most people, most of the time. This is not for people who have special needs or requirements and this system does not apply at all to people who want to follow extreme (ie, ketogenic) low carb diets.

It’s up to you if you want to customize carbs more than this system dictates. However, since reducing carbs, especially dramatically, is a form of restriction, and restrictive diets are harder for most people to follow in the long term, it makes sense for almost all beginners to start with a more balanced spread of macros, stay away from extremes on either end of the spectrum and remember that carbs don’t make you fat, excess calories do.

Research has been pouring out of universities and laboratories around the world in recent years that suggest both lower carb and higher carb diets (and everywhere in between) will work to a similar degree, provided calories and protein were set properly. It’s really not the carbs that matter for fat loss – it’s achieving a calorie deficit and adherence to your plan that matters. After covering essential nutrients, the rest is up to personal preference.

Using this formula provides a great place for most people to start. The key is to keep it simple and get started, see how you like your initial meal plan at these macros, see how you feel, gain some experience, measure your results every week or two, and then later you can decide if you want to adjust your macros a little more in one direction or the other.

Go ahead and try the formula, then let me know what you think, or if you have any questions – post in the comments below.

PS If you’d like to learn more about creating a complete fat-burning meal plan, check out Burn the Fat, Feed the Muscle – the classic “bible” on the subject is now available in audiobook here: https://amzn.to/2pCG7lX

PPS. If you’ve already got this macro and meal planning stuff mastered , but it’s emotional eating, self-sabotage and motivation you struggle with, check out The Body Fat Solution: https://amzn.to/2O55njw