Vince Gironda was a sculptor. Not of marble or bronze, but of flesh. He was a master of “cosmetic bodybuilding,” which today has become a lost art form. In it’s place have emerged the philosophies of “functional training,” “lift more weight at all costs” and “gain muscle bulk, no matter where it ends up.” 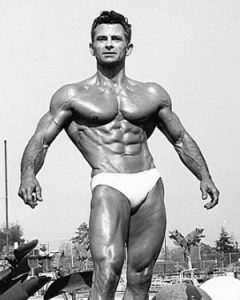 In his heyday 60+ years ago, Gironda turned out more bodybuilding champions from his North Hollywood studio than another other gym in America. His #1 secret weapon – his “magic chisel” – were his unique “Gironda” exercises…

I never cared for Gironda’s high fat, low carb, (ketogenic) diets. I tried them faithfully and found them distasteful and just not right for me. I’ll talk about that diet experiment in another article (and quite frankly, he promoted a lot of weird ideas about nutrition).

But there’s one thing I learned from Vince that’s been priceless – solid gold – and I still use to this day. That was his philosophy on selecting and performing exercises.

Every movement was done for a specific reason. Many exercises were avoided for specific reasons. It really was sculpting – physique art. It was a very thoughtful approach.

It’s important to note that this is pure bodybuilding and physique development we are talking about. This is for bodybuilding purists. These techniques have no application to sports and very little to strength. Vince’s training was progressive, as all good resistance training programs are, but it was not about how much weight was lifted.

Form was everything to Vince.

The tiniest tweak in the range of motion, the position of your body, the angle of your joints or the path of the bar would turn a conventional exercise into a super exercise – a Gironda Exercise.

With a mere shift in the position of your elbows or the angle of your torso a regular barbell curl could isolate your biceps and put a searing burn on them like you never felt before. And almost workout by workout, you could see the muscle growth.

The weight? Almost irrelevant. Ron Kosloff, who knew Vince well, often said he could embarrass the big cheaters – the weight swingers, the heavers – by challenging them to curl a pair of 25 pounds dumbbells for 8 sets of 8.

Of course, the big guys would always laugh, until they realized they had to do those reps Vince’s way: complete isolation so only the bicep does the work. Some were crying like babies, looking like fools by the 3rd set. “Whatsa matta? You got 5 more sets to go!”

With these Vince Gironda exercises, you leave your ego at the door and master the form, the concentration, the contraction of the muscle first before you even think about progressive overload with added weight. The mere act of getting the form right is a massive overload right from the first workout with properly performed Vince exercises.

Vince had a lot of favorites. Some of them, like tools in a kit, he would pull out for special occasions, others were staples – seen in almost every routine – given to every beginner. The books and courses that have been written by and about Vince list dozens of variations, but the ones below are those he was most famous for.

Some of his beliefs about exercises were controversial. For others, he was criticized…

“Bench press is 90% front deltoid! It’s worthless unless you do them to the neck!” exclaimed the Iron Guru.

“That’s not a chin up! You have to pull all the way up and touch your CHEST to the bar!”

“Squats spread the hips and give you a big ass! No back squats!”

Those were just a few that raised a lot of eyebrows. But there was always a method behind his madness; always a reason for every exercise and the way it was performed.

So without any further ado, let’s get to it. Here are the 5 most famous, most unique, most effective Vince Gironda exercises he was most known for:

This exercise has become a staple in my bicep routines for nearly three decades. It is a fantastic variation on the curl. It’s ultra strict and creates a contraction so strong, it almost feels like your biceps are cramping. What’s more, it takes all the cheating out and puts 100% isolated stress on the bicep muscles for maximum impact.

The key is to draw your elbows BACK and allow the bar to slide right up along your body, almost touching your thighs, hips, stomach and chest as you curl it up.

common mistakes: shrugging at the top, dragging the bar along the body only partially through the range of motion, using too much weight, not concentrating and squeezing.

After learning about the Gironda dip decades ago, this is how I’ve been dipping for chest ever since. I do dips for triceps too, and I consider tricep dips a completely separate exercise. To an untrained eye a dip is a dip. But the difference between a Gironda dip for chest (low pec line) and dip for triceps – not even close.

Gironda preferred this exercise because he said it developed the low pec line – which is the lower and outer section of the pectorals which defines the lower border and gives the pecs a “flare”, respectively.

Vince said you must use parallel bars that are approx 32 inches wide. Narrow dipping bars work more triceps. A V-shaped set of dipping bars is also commonly used for this exercise. Lucky me – my gym – Strong and Shapely In North Jersey – is one of the rare few gyms that has this piece of “old school” equipment.

No V-dipping bars in your gym? All you need is the wide grip parallel bars. Common machines like the cybex assisted dip and chin machine have 2 settings on their dip bars – wide and narrow. Remember: chest = wide grip. triceps = narrow grip.

The keys on this movement are to flare the elbows out wide, look down with chin on chest, keep the feet out in front, crossed at ankles, or together with toes pointed and dip down deep for a full range of motion.

Vince did not like back squats. He said they built up the hips, which he wanted to reduce. He did recommend certain squat variations like wide stance front squats, as well as this one: the sissy squat.

Vince did not claim to invent this exercise. He credited this one to Monty Wolford.

Vince said that he measured Wolford’s thighs and found his upper thigh, and his middle thigh to be the same measurement. To Vince, this was one of those magical proportions to aim for, but he said Wolford was the only man he knew with those measurements.

I’ve done a good number of sissy squats in my day, as a finishing exercise, but I never did do them exactly as Vince prescribed, even though I owned his manual that taught the exercise. I’ve always done the traditional bodybuilding sissy squat, where there is no break in the hips as you go up or down.

Vince’s way was squatting with the heels on a 2” X 4” and involved a 3 movement combination: Knee drop, Burlesque bump and flush out.

The purpose of the exercise, said Vince, was to build the strands of muscle in the upper thigh that run right up into the hip – the rectus femoris. Developing this strand he said, along with the sartorius and the vastus lateralis, would give you the appearance of longer legs, diminish the hip line and importantly – would not build a big butt like a powerlifting style back squats sometimes do.

Its difficult to understand the form even from reading the detailed instructions in Vince’s course. The video is worth a thousand words – plus it’s a rare glimpse at Vince in action. God bless You Tube.

Factoid: sissy squats are thus named for 2 reasons: 1) named after Sisyphus from Greek mythology, 2) named so because the exercise can make a sissy out of the strongest back squatter.

Conventional pull up style is to pull just until your chin is over the bar and keeping your body more or less vertical. Gironda pull ups involve pulling all the way up and touching your chest /sternum to the bar and leaning back with an arch during the movement.

The purpose of the pull up to the chest is to achieve extra range of motion and a complete contraction in the lats.

These are difficult to do properly and so the sternum chinup was not a typical beginner exercise in Vince’s program – it was something to work up to.

Probably the most advanced and challenging version is the medium grip pull up (pronated grip) where the body is almost fully planched. Mohammed Makkawy is pictured doing these in Vince’s Wild Physique book.

The biggest mistake seen in form on this exercise is the rounding over of the back at the top of the movement. Very strict form (and slow tempo) is displayed in this video.

I could post exercises all day but let me leave you with a quick punch list of other Gironda favorites:

CHEST: bench press to the neck (warning: may not be good for the shoulders! This was one of the controversial Gironda exercises)

TRICEPS: Overhead Pulley/Cable Rope Extensions. Vince especially liked the version performed kneeling where your elbows rested on a special bench (“cradle”), but the overhead rope extension is similar the equipment (high cable/pulley) is available at every good gym.

ABS: “Concemetric crunch.” That was Vince’s name for what some people call the “double crunch” – pulling in the knees and elbows together – like a crunch and reverse crunch combo. 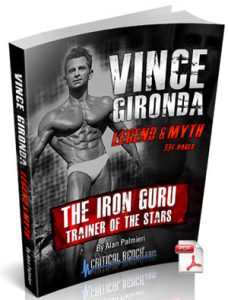 FOREARMS: wrist curls with an extra “trick” – roll the bar completely down into the fingertips.

That’s it for today gang. If you enjoy this info, be sure to check out the newly expanded 300 page by about Vince by Alan Palmieri – It’s called Vince Gironda Legend and Myth.

Lots more exercises you can try in there. A collectors item for Bodybuilding and iron game enthusiasts.

The book is published by Mike Westerdal and you can get more information at: www.CriticalBench.com/Vince-Gironda-Book-Sale

You can read my detailed review of Vince Gironda Legend And Myth here on the blog at: www.burnthefatblog.com/vince-gironda-legend-and-myth-review

PS. This was part of a series of articles about Vince Gironda: The man, the myth, the legend. If you missed the previous articles, check out the links below.