When I hear that a “new” bodybuilding course is being launched on the Internet, usually I yawn, often I groan, and seldom do I give a second glance. But when I heard that a couple of guys had gotten together online to resurrect the long-lost methods of the late, great legendary bodybuilding trainer, The IRON GURU, Vince Gironda (1917-1997), they had my attention. In fact, I was excited! 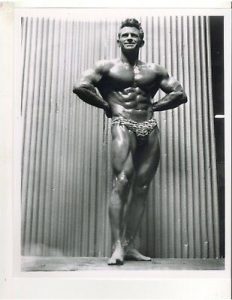 Mike Westerdal, who might be best known for his bench press courses (amusingly, as Vince thought the bench press was a terrible exercise), joined forces with Alan Palmeiri, a man who knew Vince personally as a student through phone and correspondence courses (long before the days of email and computers).

Alan wrote a book about Vince Gironda and his controversial bodybuilding methods years ago (2003 I believe). I don’t think it got much attention at first though.

Since Mike was savvy in promoting things online, Alan updated his Vince Gironda Legend And Myth book with more information and gave Mike permission to re-publish it on the internet and Mike promised he would try to finally get the book – and Vince -the visibility it deserved.

That’s exciting because every Vince Gironda student, fan or friend I have ever known wanted Gironda’s legacy to be live on. But strangely, just a couple decades after his passing, many people have never even heard of Vince The Iron Guru, even though he was one of the most famous bodybuilding trainers in history.

Some people who have heard of Vince, think he was an eccentric, cranky old curmudgeon whose methods were outdated years ago.

Ironically enough, just last week I made a post on my Burn The Fat blog about how there is really very little new under the sun in bodybuilding – mainly just new arrangements of old ideas, some of which are passed off as new, while the people who pioneered them years ago rarely get the credit they deserve.

I was writing about how the “old school” training methods going back a half a century or more were superior to much of what is being promoted in the bodybuilding world today as “breakthroughs.” I also talked about how today’s pro level physiques are all about “bulk and size at all costs” but the physiques of the pre-steroid era were far more beautiful, more symmetrical, and more classical

That is what Vince Gironda was all about: He called it “creating an illusion” in the physique by carefully selecting your exercises and building up some areas while NOT building up others. That appealed to me.

Vince detested steroids and insisted that they ruined the physique. That appealed to me the most because I’m a lifetime natural pro-natural supporter to the core. Vince trained anyone that was sent to him but he preferred working with naturals.

Vince Gironda trained everyone who was anyone back in the 1960s and 1970s. Larry Scott, the first Mr. Olympia was one of Gironda’s STAR pupils. Mohammed Makkawy, Mr Olympia contender, was another. Vince’s Gym was frequented by a whos who of bodybuilding superstardom, but what many people didn’t know was that Vince was the ORIGINAL trainer of the movie stars.

Another little-known fact: Vince was Arnolds Schwarzenegger’s first trainer. Thats right, when Joe Weider brought Arnold to America in the 1960, he sent him to the famous Vinces Gym. What happened when those two egos met is the stuff of legend. Eyewitnesses swear it’s true.

A bulked-up Arnold shows up at Vince’s gym and says, “I am Arnold Schwarzenegger and I am going to be the greatest bodybuilder the world has ever known.” The irascible and inimitable Vince replies, “You look like a fat f*** to me!

I’m not a movie star or a Mr. Olympia contender. I never even met Vince Gironda in person. He was on the West coast; I was on the East coast. So what’s the reason for MY interest in Vince?

Well, I’m a devoted student of the iron game and I’ve always studied all the greats, going back to the turn of the century strongmen through the “Golden Era.” But I REALLY studied Vince…

I was Vince’s mail order student in the 1980’s and 1990’s. I was not only a student, I was obsessed with Gironda-style training for many many years. I did some nutrition and training experiments based on Gironda’s methods that might seem so bizarre that when you read about them in upcoming blogs, you’ll probably think I was completely out of my mind!

I think I probably know as much about Vince’s methods as a person could know without having actually interacted with him personally and trained in Vince’s gym under his direct supervision.

I started reading the muscle magazines in 1983. The first one was Joe Weider’s Muscle and Fitness. But I had become obsessed with bodybuilding so it didn’t take me long to start picking up Robert Kennedy’s Muscle Mag International and Ironman Magazine, which at the time was still Peary Rader’s publication (it changed hands in 1986 I believe).

Then I noticed the classified ads for Vince’s famous bodybuilding courses and I ordered the first one. I was still a teenager. With the exception of the rare “red books” (the Vince Gironda Files), the courses were little booklets, usually under 20 pages. Vince signed most of them for me:

“To Tom: Hope you get the same results Makkawy did!
-Vince Gironda – The Iron Guru” 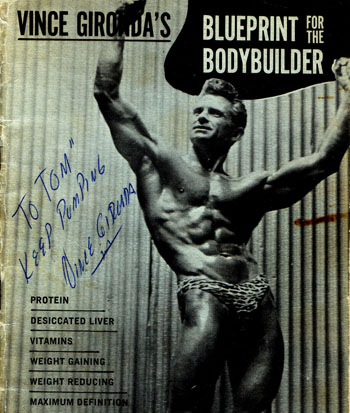 I didn’t have much money back then so I slowly purchased Vince’s courses one by one until I had collected every last one of them – there were about a dozen or so. It was the most fascinating stuff I had ever read… even if some of it seemed, well… weird.

Gironda’s methods WERE controversial. But even when he met with criticism, he was firm in his convictions. Many would call it dogmatic.

Tell people today that Vince forbade his students from doing back squats or bench presses because they would “ruin the physique” and you get some really weird looks.

Show some of Gironda’s recommended exercises to physical therapists today and they might say, “Gironda would be good for business.”

Explain some of his nutrition theories to the science crowd today and you might hear, “There’s no evidence for that whatsoever.”

But few people disagree that he was a genius and light years ahead of his time. Eccentric? A lot of people thought so. But if you really think about it, eccentricity and genius often go hand in hand. As with all visionaries, they are ridiculed first before they are accepted.

Today we can see that many of his ideas were right all along and yet there he was back in 1960, teaching those things long before there was any evidence either way.

It’s all part of the Gironda legend and persona: genius, ahead of his time, bombastic, opinionated, dogmatic, eccentric, moody, controversial, misunderstood and many other adjectives have been used to describe him. He was a fascinating character and that’s why it’s so fun to read what he wrote and what was written about him.

Even if you disagree with Vince’s philosophies and don’t think you’d follow his methods, you can read his work as a piece of iron game history. But if you’re really smart, you’ll sift through Vince’s materials, simply ignore what doesn’t apply or what you don’t believe and you’ll pan out all kinds of nuggets of solid gold worth a fortune to any real student of the bodybuilding game.

If this is the first time you’ve ever heard of Vince Gironda, the book is a great introduction to the man.

Either way, this is a collector’s item and a no-brainer purchase, especially since it’s still available at the sale price: http://www.criticalbench.com/gains/vince-gironda.

Mike explained to me clearly that Vince Gironda Legend And Myth is NOT a reprint of Vince’s courses, It’s a book about Vince and his methods. I figured as much because I spent hours on the phone with Ron Kosloff years ago and at least at that time, Ron (a close personal friend of Vince’s before he died), was the man who retained the rights to Vince’s original materials.

But when I read Alan Palmieri’s book: Vince Gironda – Legend And Myth, I was surprised at how much of Vince’s course material has actually been included in there – actual details of his training methods. That’s probably because Vince’s info has been republished so many times in so many formats. I know that just from my Gironda article collection. So while this book is somewhat biographical and historical, it’s also a training and nutrition instruction manual.

It’s quite a hodge-podge of articles and information, but I mean that in a good way. There are also classic photographs in there that I had never seen before. And a picture is worth a thousand words in the case of Gironda.

This has rekindled my interest in Vince so much, I decided I would write a series of articles and blog posts about my personal experiences using Vince’s methods.

It’s going to be a trip because, man do I ever have stories:

I’m not sure if anyone has ever critically analyzed Vince’s methods. I don’t agree with everything he taught. Most people don’t wither. He was HIGHLY controversial and totally against the grain. But you don’t have to agree with EVERYTHING he said.

I always found that Vince had such a loyal fan following as do so many gurus – that if you criticized his methods, YOU were criticized by his followers. But I’m a student, not a follower. I don’t use the “follow blindly” method. I use the Bruce lee method: Analyze your experience. Take what is useful and keep it. Discard what is not useful. Add what is uniquely your own. That’s how I approached Vinces materials and that’s how I recommend others approach it today.

Don’t get me wrong. I was an excellent student. When I tried something he recommended, I followed it to a T, just as he recommended it, at least once. I feel you OWE that to anyone you entrust as your coach, not to mention, you’ll never know unless you try it. But if I tried it faithfully and didn’t work or if I didn’t like it, I threw it away or modified it.

What I DON’T recommend is a closed mind or disregarding everything he said just because you don’t like a few things he said. I guess that’s my way of saying, don’t throw out the baby with the bathwater.

So in the upcoming articles, I’ll be going through Vince’s techniques and giving you my personal opinion about his controversial ideas and philosophies. But I’ll also analyze it all with a critical thinking or scientific mind as well.

Well, I’ve already rambled on longer than I thought. Get yourself a copy of Alan Palmieri’s Vince Gironda book at: http://www.criticalbench.com/gains/vince-gironda.

I’ll be adding more articles about Vince’s techniques in future posts, and I’ll keep writing them until I get bored! (and if you have any questions, please post them in the comments below. 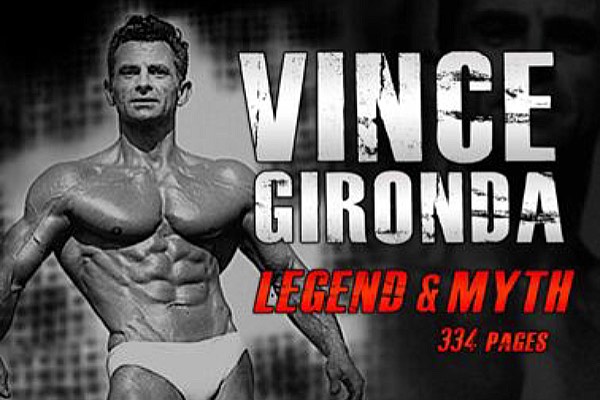