If It Fits Your Macros (IIFYM): The Pop Tart Diet Revisited

IIFYM is an acronym for, “If it Fits Your Macros.” “Macros” of course,  is shorthand for macronutrients – protein, carbohydrates and fats. What does this have to do with Pop Tarts?  Keep reading and you’ll find out.  The spread of IIFYM through the online diet world in the last few years has led to some absolutely epic debates, controversies, and misunderstandings, depending on how different people explain or interpret IIFYM 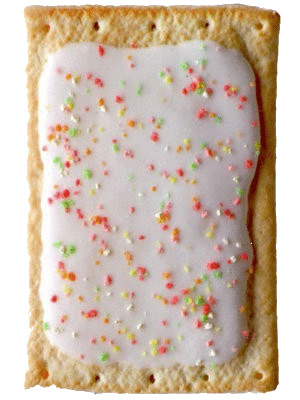 IIFYM promotes flexible dieting, where you don’t have to be super strict with your food choices – you can allow a  certain amount of your calories to come from any junk food you want, from Pop Tarts to Ice Cream as long as your track your numbers – protein, carbs, fats and calories – and get your numbers right.
I’m a supporter of flexible (and customized) eating plans, and always have been, but I have some mixed feelings about this IIFYM craze –  and you’ll understand why by the end of this article. Some of my dislike has less to do with the premise, and more to do with the attitude of the practitioners.
Another problem is that IIFYM has no official definition, leaving it very open to misinterpretation. You could even argue that the name implies, “If you hit your macros, then anything goes – eat whatever junk food you want.” Without a deeper explanation, it sounds that way on the surface, doesn’t it? (which is why I don’t really care for the name, IIFYM).
So why don’t we start by defining IIFYM and trying to figure out, what was the original intention?
What is IIFYM and how did it get started?
First of all, some people call it the “IIFYM diet.” However, most people who support this approach say that IIFYM is not a diet or a specific nutrition protocol. IIFYM is simply an eating philosophy that recommends flexibility in food choices instead of rigid dieting, (which requires you to eat 100% “clean” or follow strict lists of specific foods).
Legend has it that IIFYM was not the brainchild of any particular diet guru, like most brand name diets. It started literally by accident in one of the popular online bodybuilding forums, where newbies were constantly asking the experienced members, “Can I eat this?” Is it okay to eat that? Will this food make me fat? Will that food make me fat?” and so on.
Anyone who is knowledgeable about nutrition knows that individual foods don’t make you fat per se, it’s an excess of calories makes you fat.
So finally, (after starting to get annoyed), one of the senior forum members said, “As long as it fits your macros and it fits into your calorie limit, you can eat it and you’ll still lose weight.” A newbie repeated back, “If It Fits Your Macros, you can eat it???” And so a simple conversation in a forum gave a name to a new movement, which quickly attracted a loyal tribe of followers (which is not surprising, considering it gives you permission to eat more junk food).
Many dieters once believed, and many still believe, that if you eat “junk food” such as doughnuts or candy or potato chips or ice cream (or pop tarts), those foods automatically turn into fat,  regardless of how many calories you consume (because they are “bad” foods or “fat storing” foods). That’s actually ridiculous when you think about the laws of thermodynamics.
It really is true: If you’re in a calorie deficit, you will lose weight even if some of the calories come from junk. Calorie deficit = weight loss. (However, habitually eating a lot of junk food can be harmful to your health, and we’ll come back to that shortly).
Almost everyone agrees that IIFYM was never intended to mean eating nothing but junk food. IIFYM practitioners are simply saying that it’s not necessary to eat 100% “clean” and in fact, that it’s better for your long-term success and mental well-being to be more flexible.
It logically follows then, that if all it takes to lose weight is a calorie deficit, then why restrict yourself exclusively to traditional (boring) diet foods like egg whites, chicken breast, fish, salad, broccoli and so on?
Why not enjoy yourself a little and create your meal plans based on personal preference? Why not allow some room in your calorie budget to include your favorite foods? Won’t you enjoy your meal plan more that way? Won’t you be more likely to stick to your plan? These are good questions.
In IIFYM, you create meal plans or track food intake by the numbers: calories, protein, carbs and fat. Mobile apps are an IIFYMers best friend. The food selection remains flexible, based on healthy foods you enjoy (which is why this approach is also known as “Flexible dieting”), and you also allow yourself a certain amount of calories from any junk food indulgence you want.
IIFYM: New name, but NOT a new concept