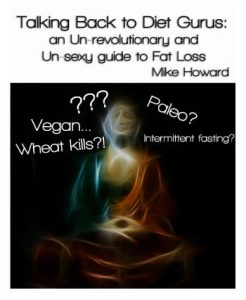 Book Review
Mike Howard is one of those rare up-and-coming writers in the small, but growing evidence-based health and fitness community. This is a group of people who don’t make strong claims without strong science to support them. As consumer watchdogs, they also demand the same from others, to the point of “calling them out” if necessary, as when unsubstantiated claims draw great attention to a diet program. Thus the title, “Talking Back to Diet Gurus.”
Mike helps you make sense of the diet program paradox: There is a huge volume of information about health and weight loss today but it seems inversely proportional to our success at getting leaner and healthier. With few exceptions, there is also an inverse relationship between how well a diet book sells and the science contained within it.
Most diet books are based on predictable patterns of deception, half-truths, exaggerations, myths and outright lies. They are all persuasively packaged with unbelievable promises, typically involving rapid weight loss at a rate faster than nature intended. Fear and contrarianism are ever-present.
This book was written to help readers cut through all this noise and find the accurate and useful information. Mike doesn’t tell you what to think, he teaches you how to think for yourself. He encourages you to be open minded, but not so open minded that your brain falls out. The goal is to be appropriately skeptical.
The book is short but packed with info — no filler. The first part begins with the checklist for “how to write a best selling diet book.” It’s scarily accurate how Mike has identified all the themes used to hook us and named the bad guys used as scapegoats for obesity. Examples: Wheat/gluten, toxins, hormones, insulin, big food, big pharma and anything that wasn’t on this earth when we were cavemen. Anything but calories (“they don’t count,” according to many diet gurus).
Next up is guru-ism and the uncanny similarity diet communities have to political and religious groups. Mike explains cognitive biases including confirmation bias — the human urge to seek evidence that supports our pre-existing views and to reject anything that conflicts with them. You learn about the logical fallacies, and the examples given in the context of health, fitness and nutrition are priceless for helping you really understand them. You get a crash course in how to scrutinize a study, so you can read between the lines the next time a mass media article quotes (or misquotes) the latest “breakthrough” in the research.
A line to remember: “Pubmed knows more than any guru.” Mike also explains the 3 biggest diet book lies and the 2 secret weapons of the diet gurus. Last but not least, you get 10 health, fitness and fat loss tips which are “unsexy” and “un-revolutionary,” but also happen to be the most important.
You’ll not only come away from reading this book with the ability to think and make informed decisions for yourself, you’ll also drop irrational fears of food, end the guilt when you’re not perfect (because you don’t have to be), and understand what really matters the most for good health. (Spoiler: most of the dietary “devils” the gurus have been scaring you about are non-issues).
Mike freely admits to having a snarky, unapologetically direct style, which might be off-putting to some. Me, I not only like it, I think that given the sheer ridiculousness of the claims made in some of the top selling diet books of all time, a bit of sarcastic humor, amidst the accurate science about a serious topic, is the perfect, and perhaps even the best way to address the problem.
For disclosure, the author Mike Howard is a guest writer for two of my websites, which is how I’ve known mike for a couple years and found out about his book. I received an early draft for review, but was not compensated for, nor did Mike ask me to write a review here or on Amazon.com. I’ve reviewed this book because I recommend it to anyone who is interested in an evidence-based approach to health, nutrition and fat loss.
It’s not the type of book for people who are looking specifically for an eating and training program (although his 10 “unsexy” and “un-revolutionary” are a big help. It IS the type of book for people who are looking to develop the critical thinking skills to cut through the myths and the hype and have confidence to choose an eating and training program themselves and know it’s the right choice.
Get Book At Amazon:
http://www.amazon.com/Talking-Back-Diet-Gurus-Un-Revolutionary-ebook/dp/B00JCUCTKI