In May of 2017, I embarked on a quest to hike the Pacific Crest Trail (PCT) on the West coast of the United States. It was both the hardest thing I ever did and the most rewarding experience of my life. In those four months of backpacking, I learned some incredible lessons about success and setting and achieving goals and I talk about this in my first interview, published exclusively here at Burn the Fat Blog. But first, an introduction. 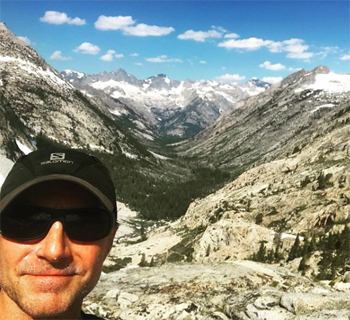 The PCT is a -2650-mile footpath running from the Mexican border to Canada.

It starts in the desert, and winds through California, Oregon and Washington, over 57 major mountain passes, across 7 national parks, into 48 federal wilderness areas, through 25 national forests, and past more than 1000 lakes.

The highest point is Forester Pass in the Sierra Nevada Mountains at 13,153 feet (and you can take the side trip to Mount Whitney which is the tallest peak in the contiguous United States at 14,508 feet).

That’s about 6 million steps, most of them at high altitude, with 490,000 feet of elevation gain and loss. Men will burn 5000 to 6000 calories per day or even more. Because of hazardous weather in the winter, most people start hiking northbound in April or early May and must finish before Snow starts to fly in the Washington Cascades in October. It takes most people about 5 months.

Everything you need to survive for almost half a year must be stowed in the pack on your back. You sleep on the dirt, in a tiny tent. Every 3 to 7 days or so, the remote path reaches a trailhead, that leads to a road, that leads out to civilization, where there’s a grocery store to replenish your food supply, and sometimes, the luxury of a shower and a bed for a night (and for me, a gym with a free weight room… )

Many people who live nearby enjoy day hikes on the PCT. Backpackers may spend several days or a week in the most scenic parts. Section hikers aim to do large chunks like Southern California or the state of Oregon, often with the goal of hiking the whole trail over a period of years. A thru-hike means that you intend to complete the entire trail continuously in one season.

Thru-hiking is an extraordinarily difficult feat of physical and mental endurance. More people have climbed to the summit of Mount Everest than have thru-hiked the PCT.

But if a straightforward hike from Mexico to Canada doesn’t sound hard enough, there’s this:  The difficulty of completing the trail depends on how much snow remains at the higher elevations in the summer. Typically, it’s not safe or practical to start crossing the Sierra Nevada before the middle of June.  If you do, you’re looking at a mountaineering expedition and skiing trip, not a hike.

Even in a normal year, you still have to hike over snow in the summer, (requiring an ice axe and crampons), as well as cross creeks and rivers swollen with snowmelt. But 2017 was not a normal year, it was the highest snow year in the Sierra in the last two decades. “Impassable” was the catchword being passed around the hiking community.

An Outside magazine headline warned, “The Pacific Crest Trail is Super Dangerous This Year.” It wasn’t just hyperbole. There were close calls, accidents and sadly, deaths including two young women who were swept away in raging rivers.

And then there was fire. 2017 was one of the worst wildfire years in history. Many hikers, including myself, made it through the snow, only to be confronted with signs that said “PCT Closed” and we were forced to skip or take detours. Depending on where the wind blew, even if the trail was open and flames were miles away, smoke filled the air and obscured the views. At times, it was so thick you could taste it and ash floated down like black snowflakes. They called 2017 on the PCT, “The year of fire and ice.”

For prepared hikers, who exercise caution, all the dangers on a thru hike are manageable, and the risks are low. Yet, on the PCT, blisters, aching feet, muscle pain, dehydration, hunger, and exhaustion, are constant companions.

So why would anyone sign up for this insanity? Especially why me? In many ways this was the opposite of my usual hobby and sport –  weightlifting and bodybuilding. Some of my gym friends and fitness colleagues criticized me or even laughed when I first announced my goal: “You’re going to lose all your gains!”  It didn’t deter me, but I knew they weren’t entirely wrong.

To the best of my knowledge no one has ever kept up a weight lifting routine while thru-hiking any long distance national scenic trail. It almost doesn’t make sense.  I committed to keep lifting, but I knew I could only do it once or twice a week while in town to resupply my food and I knew it would not be easy, especially training legs.

I also knew it was not going to be easy to eat enough calories to avoid losing unhealthy amounts of weight. Would I look like a POW starvation victim when I was finished? I’m not an endurance athlete, so why would I do something so contrary to my usual goals that might tear my body down?

There were four big reasons.  One, I wanted an adventure. Two, I wanted to challenge myself physically in a completely new and different way. Three I wanted to experience freedom. Four, I wanted to see some of the most spectacular mountain and wilderness scenery in North America.

I’ve been an avid day hiker for years, and after living in California for three months in 2016 and visiting Yosemite, Mount Shasta, Mount Lassen and Mount Whitney, that is how I discovered the PCT. After seeing all that beauty, I knew that was the adventure, challenge and freedom I wanted.

My hike ended after only 1800 miles. Hundreds of miles of trail were closed due to wildfires, and though hundreds more were still open, I decided that since I couldn’t finish a through hike, I’d end early and be among those section hikers who return to complete the rest another year, If I still desire to. My time on the trail still felt complete to me. I got everything I wanted out of the experience. It was the greatest adventure and biggest challenge of my life so far.

When I returned home, I was asked many questions. Most of them followed a similar thread: Did hiking the PCT change you?  Did it transform you? Did you find yourself? Did you have any epiphanies?

There’s no doubt thru-hiking the PCT was a life-changing experience of personal growth and self-discovery.  For many people, it shifts their worldview. But I don’t think I would describe it as some kind of enlightenment or transcendence. I would describe it more mundanely as a learning experience.  Thru hiking the PCT teaches you lessons. A lot of them.

Many were already a part of my philosophy on life success and this trek merely confirmed and strengthened them. But I also learned new lessons. And I was looking for them too, so every time one came to mind, I made a note of it.  When I got back to civilization, I sat down in front of my computer, reviewed my notes from the trail, and now, this is the first time ever I have talked about my experience and about the lessons I learned in an interview.

Click here for part 1 of this epic 3 part series

-Tom Venuto, author of Burn the Fat, Feed the Muscle