5 Strategies to Get Ripped: How James Shredded Down to 4.3% Body Fat in 49 Days

The photo on the right (the “after”) displays what 4.3% body fat looks like. This type of conditioning is what we call, ripped! But what’s most amazing is that these results were achieved in only 49 days… 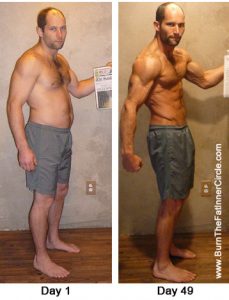 It’s not just the low body fat number that’s impressive, it’s the total transformation – and how fast he did it. In the before photo, James was 25.6 pounds heavier with 16.1% body fat.

How did he do it? You’re about to find out in the short interview below.

The “Most Ripped” award James won is one of the most coveted prizes in the 49 day Burn the Fat, Feed the Muscle Challenge, a contest held every year at www.BurnTheFatInnerCircle.com.

That’s because getting ripped is an exceptionally difficult achievement. It’s almost always those last 5 to 10 pounds of stubborn body fat that are hardest to get rid of, so most people – even if they manage to get “semi-lean,” never get all the way to ripped.

James said that he knew it was the basics that produced the most significant results – a calorie deficit and weight training, so he just dove in and started there. It was later that he started to fine-tune the details like the exact grams of carbs, the protein timing and so on.

It also appears that great transformations run in this family. James’ wife Hannah, was the overall winner of the first ever Burn the Fat holiday challenge (which also won James a trip to the Caribbean – it was a trip for two, naturally).

James saw the changes his wife made to her body and knew he could do something similar with his. He made good on his word. Just as his wife has continued her fitness journey two years after her first foray into the transformation contest world, James has made lifestyle changes and he swears he will never have a belly again.

Now let’s hear from James himself… We reached out to “Mr. Ripped” and asked him this question:

“James, When you think back to the 49-day Burn the Fat Challenge, what were the most effective strategies you used that you think were the most important in allowing you to get such rapid results, and specifically, anything you think that was critical to your success that would also help our readers get great results fast like you did?”

5 Strategies to Get Ripped: How James Shredded Down to 4.3% Body Fat in 49 Days

Going into the 49-day contest, I wanted to follow Tom’s book that we had on our shelf, Burn the Feed The Muscle, as the plan for the challenge. The problem was I hadn’t read that book yet for myself, I only knew the basics from my wife who thoroughly read it two years earlier.

I did know that I needed to be in a good calorie deficit and I knew I needed to lift more than twice a week to maintain muscle. Since I never used supplements before, I didn’t want to start and I was glad that Tom’s program doesn’t push supplements (although towards the end of the challenge, I had one protein shake in the evening).

As I progressed though the book, I adjusted my angle of attack. By the end of the challenge, I think I was much closer to Tom’s exact system and wish I had got into it much sooner. One thing I noticed was that the last week, my hunger was so much less than I expected, I almost felt like I was cheating.

I think the results I achieved could have been procured with a little less suffering and hunger in the early part if I had spent more time studying. But I have always learned better more by doing and less by reading. I learned along the way. The key is to just get started and just get out there and do it. No one ever finishes what they don’t even start.

Here are the top strategies I used and how I adjusted them along the way to get the results you see in my pictures:

Above 8-10% body fat, I got by with just a good calorie deficit, nothing fancy. I was aiming for a solid 30% deficit. I didn’t plan any high-calorie (refeed) days, just a few higher calorie meals here and there, although I still kept it under maintenance for the day even then.

I heard that a common mistake was to underestimate how many calories you eat, so I made it a point to overcompensate. I didn’t measure or weigh food, but we would talk about meals and roughly add up the total calories and then I would portion out what I thought I should eat.

I seemed to have plenty of energy to lift weights, which became my most relevant gauge. If I felt like I ate too much for one meal, say like a Jim Beam burger, I would just eat less later to make up for it. I always properly compensated. I went with more deficit or even a longer duration without food if needed to maintain the deficit.

As I got to lower BF% (below 6-8%) I discovered eating to maintain energy and lean body mass had become a lot more technical. So this is where the macronutrient proportions and more frequent meals with protein I was reading about became more critical. When I spread out the intake, I got the proportions better balanced.

I wanted a sustainable balance between gym time, family time and project time. I decided I could afford five hours a week. I tried to spend the first 45-60 minutes lifting as hard as I could. After that, I would burn any remaining energy with about 16 minutes of cardio (trying to keep my lungs burning and at least a 170 heart rate if there was energy for it).

I did most weights with supersets in groups of 2-4 exercises. I tried to do 12 reps, two to three times, generally to failure in each set. I did upper body Monday/ Wednesday/ Friday, and lower on Tues /Thurs. On lower days I did a little cardio first (12 min) to warm up. Since lower didn’t take as long as upper days, I mixed in whatever extra I thought I missed. I worked more on shoulders because of how that enhances your width and symmetry.

I had expected at best to maintain muscle and was pleasantly surprised that my strength increased and I went up 50 lbs on my shoulder press over the 7 weeks.

Since my wife Hannah was on the same program, meals were well-balanced, at least 30% protein, and with very few refined carbs. Vegetables and fruits became snack foods.

During the first few weeks, I tolerated an occasional cookie with little side effect. Toward the end of the challenge, every calorie was accounted for. If it wasn’t nutrition or fuel for the gym, it didn’t go in.

I used cardio mainly just to work on heart and lungs, not as much for burning calories, although I would go longer on cardio sessions if I thought I ate too much in a day. I noticed my resting heart rate dropped as low as 42, which actually seemed kind of scary, even though I know that’s a sign of high cardiovascular fitness.

As strange as this may sound, the last few weeks, the cardio seemed almost counterproductive. It seemed like I was eating to have energy to lift weights and the way I was lifting weights (with so many supersets) was already a cardio workout. So I actually decided to cut back on cardio by the end.

What I focused more on was the N.E.A.T. I tried to mix in more activity outside my regular workouts. I saved a good dirt moving project for a retaining wall at home for the evenings of the last week. It took my mind off food, it was productive, and it burned a lot of calories in the final fat stores that didn’t want to go.

I was already on the best two-person team. My wife Hannah was extremely motivated and completely dedicated to the plan.

Staying in frequent contact with people in the Burn The Fat Inner Circle who were all heading in the same positive direction made staying the course absolute.

YOU Could Be The Next Success Story

There’s nothing like a big goal and a big challenge for ramping up your motivation (the chance to win great prizes doesn’t hurt either). And, when it’s done inside a community like our Burn The Fat Inner Circle, the support skyrockets your chances of success compared to trying to go at it alone.

Join us for the next challenge and join us in the Burn The Fat Inner Circle members area to stay motivated and connected to positive people all year round. Click Here To Learn More About The Inner Circle. 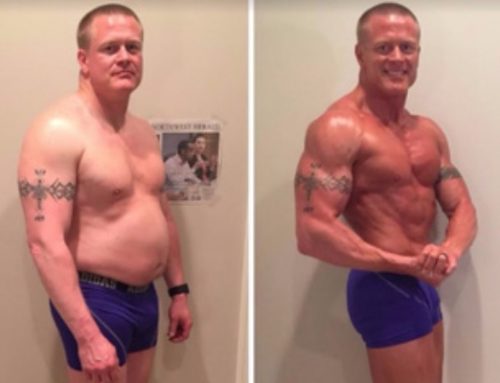 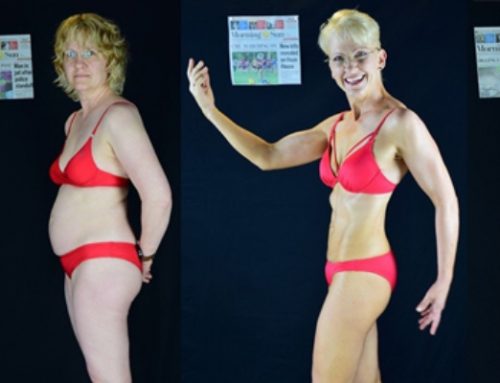 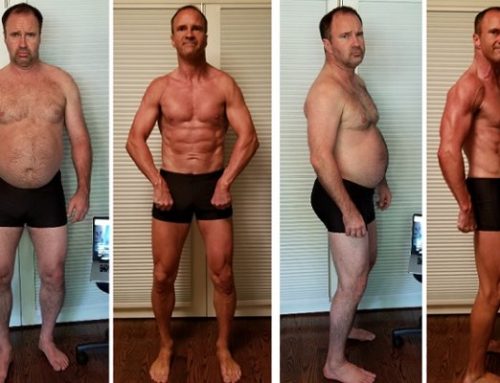 How A Health-First Focus Led To Body Transformation Victory

How A Health-First Focus Led To Body Transformation Victory 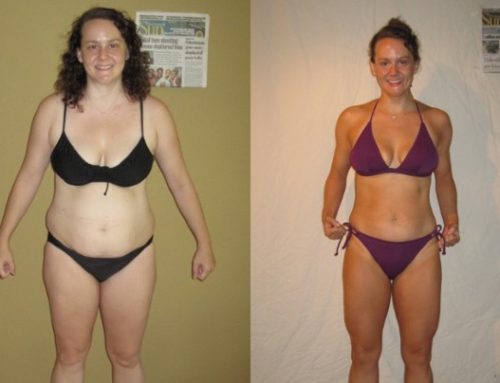 The Fat Loss Puzzle: Putting The Pieces Together

The Fat Loss Puzzle: Putting The Pieces Together 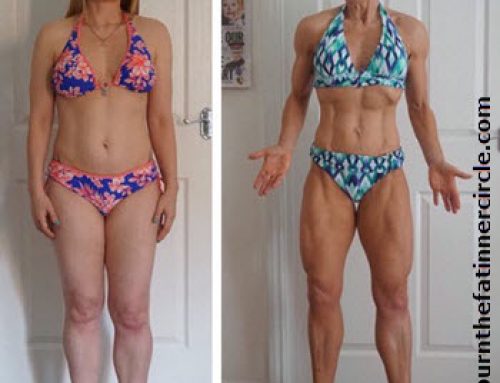