It was once fashionable in the diet industry to suggest things such as “Eat breakfast like a king, eat lunch like a prince, and eat dinner like a pauper” or even, “Don’t eat after 6 pm.” At one time, I recommended a strategy I named calorie tapering (or carb tapering). This called for larger meals earlier in the day and smaller meals later in the day, or even no eating at night. 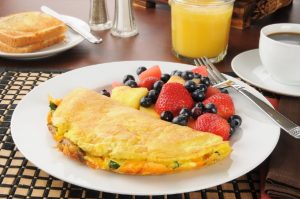 Funny enough, these diet “timing” strategies were sometimes mocked as being fads or “bro science.”  Now a new study suggests there may have been something to “front loading” calories all along.

Enormous amounts of observational research has shown that eating breakfast is associated with better weight loss. But whether breakfast eating is better for weight loss in a cause and effect sense has always been debatable.

In the past, eating more at specific times of the day was considered a priority. Both the post-workout meal and breakfast have been referred to as “the most important meal of the day.”

More recently, opinions shifted to the consensus that nutrient timing matters, but is not the most important priority compared to overall calorie and macro intake for the whole day. Most evidence-based nutritionists and coaches now say that meal timing, size, and frequency should be left to personal preference (within appropriate limits, of course).

A new study published in The Journal of Clinical Endocrinology & Metabolism suggests that nutrient timing (in this case, eating a larger breakfast) does influence weight loss and calorie expenditure after all.

“Extensive breakfasting should be preferred over large dinner meals to prevent obesity and high blood glucose peaks even under conditions of a hypocaloric diet.”

In a news release, the lead author also said:

“We recommend that patients with obesity as well as healthy people eat a large breakfast rather than a large dinner to reduce body weight and prevent metabolic diseases.”

It would be easy for fans of breakfast eating (like me) to use this study as evidence against any dietary protocol that allows or encourages skipping breakfast. That’s how it appears at face value. However, there were limitations to the study. To confirm the results with more certainty, future studies of this kind should be longer in duration, with larger sample sizes, and well-trained subjects, including women as well as men.

It’s also worth pointing out that plenty of people are successful at weight control without breakfast, including those on time-restricted feeding diets where calories are back-loaded (big dinner). That kind of diet is not for me (try to take away my a.m. eggs and oatmeal and you’re losing fingers!), but for some people, it appears to fit their lifestyle, suit their preferences, is sustainable, and doesn’t cause hunger problems.

But there’s growing evidence that even if someone prefers a time-restricted, back-loaded eating schedule, front-loading calories could be just as effective. Some scientists who study chronobiology and circadian rhythms are now even saying that it’s better – they’re calling it “early time restricted feeding.”

At any rate, the idea that skipping breakfast is somehow superior for weight loss – an idea that was being pushed a lot in recent years – is not well-supported by science and never was.

The truth is, if someone chooses to regularly skip breakfast and then sees better weight loss, the reason is not because of any dietary magic, it’s because this change resulted in that person eating less.  A different person might have ended up over-compensating later in the day by eating more, leaving them no better off, or even gaining weight.

Maybe the “skip breakfast” idea only got as popular as it did because trendy diets like intermittent fasting called for it. And perhaps if someone did want to skip a meal, it’s more convenient and socially suitable to skip it in the morning and eat like a king at dinner.

Let’s also not forget that good old bodybuilding nutrition, with 4 to 5 protein-containing meals spread evenly across the entire day is still as effective as ever for fat loss. It’s also still the most popular diet strategy among physique athletes. In addition, research on protein metabolism suggests this classic bodybuilder approach is superior on the muscle-building side as compared to infrequent feeding or breakfasts that lack protein.

Bottom line: This study shows a favorable effect from putting more calories at breakfast, but we do have to acknowledge that nutrient timing of any kind is  secondary in importance to overall daily calorie and macronutrient intake, and there’s more than one way to set up a daily eating schedule that works.

The only person who is really wrong about diet is the person who insists his way is the only way or the best way for everyone.

Weight loss is achieved by sustaining a calorie deficit, and whatever meal schedule and calorie timing helps you achieve that deficit the easiest (including by controlling hunger) is usually the best choice when weight loss is your goal.