You want to stop drinking soda or eating potato chips (or, insert other indulgence you know is not helping your fat loss endeavors), you sincerely do. But you’ve tried so many times, and while you may have enjoyed some short- lived success, your attempts at change never seem to last long. It’s like there’s a mysterious magnetic “pull” drawing you back to your old ways – it’s like a groove you slip right back into.  That’s the bad news about the power of habit. The good news is, there’s a secret to breaking bad habits and it’s right here in today’s post. 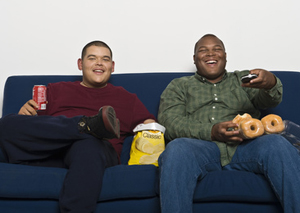 “The beginning of a habit is like an invisible thread, but every time we repeat the act we strengthen the strand, add to it another filament, until it becomes a great cable and binds us irrevocably.”
– Orison Swett Marden

Entire books have been written about habits – how they are formed, how to break the bad old ones and how to form good new ones. It’s a deep subject, and one that has been investigated by psychologists more than ever in recent years, and one that I will explore more in future Burn the Fat Blog posts.

I’m fascinated by research on the subconscious and the automaticity of behavior, and I’m happy that thought leaders are challenging old notions and discovering so many new things about habits that we never realized.

However, most blog readers (most anyone, actually) are looking for simple, yet effective solutions to help break the ponderous chains of bad habits that have been binding them. That’s how I’d like to help – by giving you one simple strategy you can start working on – today!

Replacement, not removal
If a nail were driven flush into a board, you wouldn’t be able to pry it out with the claw of a hammer. That nail is in there! But you could drive it out with another nail.   That’s a great analogy for how you drive out bad habits as well. The key is replacement not removal.

It’s also a psychological axiom that when you remove something, it leaves a void that begs to be filled. In the case of habits, if you don’t fill that old negative habit void with something new and positive, most people will either revert back to the old habit or replace it with another bad habit. In that sense, you could even say it’s more like a vacuum than a void.

That’s not to say that people don’t succeed by quitting bad habits cold turkey. It’s only saying that if you choose to drop a negative habit all at once, it’s even more important to replace it with a positive habit.
This means that it’s not enough to be aware of the habits you want to break, you also need to know what positive habits you must create and adopt every day to succeed, and then make the swap.

Out with the old, in with the new

For example, if you have a soda habit, instead of saying, “I’m going to stop drinking soda,” you’d say to yourself, “Every time I feel an urge to drink soda, I’m not going to do nothing, and sit there in the void feeling a soda craving, I’m going to do something else positive instead: I’m going to drink water.. maybe I’ll even have sparkling water with a dash of lemon.”

If you have a potato chip “addiction,” instead of eating nothing when the craving for that snack strikes, you could say to yourself, “I know my body doesn’t really need potato chips right now, but I am going to eat something – I’ll have some almonds or walnuts instead – I know there are healthy fats in there instead of the unhealthy fats in the chips.”

Here’s another incredible and powerful reason to use replacement instead of removal: Negative habits are often triggered by environmental or emotional cues.  In that sense, triggers are usually said to work against you. But what if, by using this replacement trick, the appearance of a craving for the old unhealthy food actually became a trigger that reminds you of your goal and the healthy food you want to eat instead?

This is a secret I used during my bodybuilding competition days. I’ve developed great habits over the years, so eating healthy food every day is automatic for me now. But when you’re on a diet as strict as a competition diet, believe me, you start to experience wild cravings you never had before!

I used the same technique to overcome them that I’m recommending for you to overcome old habits. At the moment I noticed the craving – a decision point moment – I practiced linking that feeling with thinking about my new goal, how badly I wanted that goal and reminding myself what I should eat instead to reach my goal. (This of course, also requires that you have a clearly defined goal and a powerful reason why you want to achieve it. You can learn more about goals in Burn the Fat, Feed the Muscle, Chapter 6).

I’m not sure which healthy and /or low calorie food you want to replace your unhealthy and/or calorie-dense food habit with, but you have no shortage of choices.  The examples above are just examples.

I’ve found in personal coaching sessions, that when pressed, right down to the last person, everyone can name a healthy food replacement that they actually like. I’m not saying they like it better than the old food, but they do like it and could eat it daily as part of a lifestyle plan. That’s the kind of replacement food you should choose.

So here are two questions for you to answer right now:

I find that even the most well-intentioned readers and clients often brush off exercises like this (a lot like they brush off goal-setting exercises).  They seem to feel that just reading or thinking about it is enough. It’s not!  Think on paper! That’s your first real action step, and it’s all about action!

Scroll down to the comments and write your food swap (what you will remove and replace it with), and you’ll be taking an important first step toward getting leaner and fitter today. You’ll also be contributing to a great community discussion that helps all our readers as well.

If you want to learn more mindset and mental training strategies, combined with nutrition and training tactics used by the leanest people in the world, read (or listen to) read Burn the Fat, Feed the Muscle

PS. Want to see another great way to develop fitness habits? Enter the 28-Day Burn the Fat Fitness Habits Challenge! Click this link to see when the next contest starts: www.BurnTheFatChallenge.com

Related: Habit Based Eating: How To Lose Weight Without Counting Calories