Can Too Much Cardio Slow Your Metabolism?

Adding more cardio to your exercise regimen will only help increase your fat loss right? If all else remains equal, the answer is usually yes: more calories burned = bigger calorie deficit = more fat loss. However, if you go overboard with your cardio, could the excessive training volume actually backfire on you and decrease your metabolism? If so, how do you avoid this? How much cardio is too much? What is the ideal way to balance between calories eaten and calories burned? Find out in today’s post

Q: Dear Tom: I recently read an article on metabolic adaptation. It was extremely informative, but it did bring up a new question. I know that to lose fat we have to create a caloric deficit and we can do that by A) decreasing caloric intake from food, B) increasing our calories burned through training / activity or C) a combination of both.

I have read your book Burn the Fat, Feed The Muscle (BFFM), and I know that you don’t like option A if that means just cutting calories from dieting alone, without training. In BFFM, a suggested strategy for accelerating fat loss is “B”, which is increasing cardio while maintaining a constant calorie intake.

In other words, most people just cut their food lower and lower, but you’re saying that we can increase our calorie deficit by adding cardio while continuing to eat the same amount of food. I LIKE more food, and this makes sense to me except for one thing:

As an endurance athlete, I already do a lot more cardio than the average person, up to several hours a day of biking. Of course, I do eat more on training days, otherwise I wouldn’t survive the long bike rides. Your article said that doing too much cardio can trigger the body’s metabolic adaptation response and actually decrease your metabolism. Now I’m worried. What should I do? 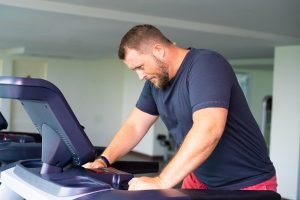 A: This is important because in essence, you’re not just asking about metabolism, you’re asking much bigger questions such as: What is the best way to achieve a calorie deficit for fat loss? Diet or exercise? If a combination of diet and exercise is ideal, then how do we find the perfect balance between the two?

This is one of the biggest debates in the entire weight loss field. Everyone agrees that a caloric deficit has to be achieved to produce weight loss (except for a few fruitcakes who believe things like, “It’s the insulinz!” “It’s the toxins!” “It’s your clogged colon!” and so on), but the experts don’t agree on the best way to achieve the deficit – eat less or burn more.

Some experts argue that exercise is not an effective strategy for weight loss because they say it’s too hard to burn a lot of calories. They add that some people might compensate by increasing food intake after cardio, canceling out the benefit. They argue that it’s easier to cut back your food intake.

Others, including myself, argue that cutting calories is part of the deal, but by itself, it’s not optimal. Adding a training program will not only help achieve the deficit, but also give you health benefits and improve your body composition. The dieting-only approach without the training = “skinny fat person.”

In BFFM, we lean toward the burn more side, but the ideal way to achieve a deficit is certainly with a combination of diet and exercise. There’s no doubt that combining nutrition and training is crucial for healthy fat loss because without weight training, a lot of bad things happen during caloric restriction. The million dollar question is, how much cardio should you do?

We know that if all else remains equal, you will lose more fat by adding cardio on top of your nutrition + weight training strategy. If there is no compensation, there will be a direct correlation between the amount of cardio you do and the amount of weight you lose. On the other hand, it’s certainly possible to do too much cardio and that brings us to the answer of your question…

Yes, metabolism can decrease from doing too much cardio. This is called “adpative thermogenesis.” Most people think this only happens from starvation dieting (thus the frequent term “starvation response”), but research suggests that if you go overboard on the cardio, that can also trigger a similar adaptive response.

There was one interesting research paper that confirmed this. Scientists from the University of Vermont published their findings in the Journal Sports Medicine:

These findings seem counter-intuitive, but experience seems to confirm it. Occasionally we see case studies of people doing huge amounts of cardio or endurance training, yet they’re not losing weight at the rate you’d expect based on the calorie math, even if they’re tracking everything carefully.

It appears that this adaptation happens for a similar reason it does with starvation dieting: It’s a protective mechanism. With extremely high cardio, your body perceives a danger of depleting its energy stores very quickly, so metabolism decreases.

This doesn’t “shut down” your metabolism or completely stall weight loss. You’ll still keep losing if you’re in a deficit. But your body is trying to conserve energy, so fat loss is slower than you’d predict considering the huge amount of cardio.

Can cardio slow metabolism? Yes, but here’s the catch: It doesn’t seem to be a large amount of cardio alone that’s causes the adaptation. The slowdown in metabolism happens the most when you’re doing extreme amounts of cardio AND you’re severely cutting calories at the same time.

It appears that you can cut calories fairly aggressively and not experience any serious metabolic consequences if you’re eating plenty of protein and your training volume is conservative, perhaps just 3-4 days a week of lifting weights with minimal cardio.

It also appears that you can do a LOT of cardio without consequences if you fuel yourself appropriately. Just look at endurance athletes – they’re doing a ton of training, but they’re also eating a lot more to support the training demand.

What you should avoid is doing hours and hours of cardio every day in an attempt to lose weight, while slashing calories to very low levels at the same time. That is worse than starvation dieting alone. Your goal is to find the right balance between burning calories and cutting calories and avoid extremes on either side.

Most endurance athletes are pretty lean. But if you’re a cyclist, etc, and you want to lose fat, you have the same energy balancing act to manage – to achieve a deficit. But because many sports require very high amounts of training, you have to create a deficit at a higher level of caloric intake.

The higher your caloric expenditure, the easier it is to achieve a large deficit. however, it would be wise to keep the deficit within the usual BFFM calorie deficit guidelines: that’s usually 15-30% below maintenance. A really high cardio volume and a really low calorie intake (aggressive deficit) is not a good idea.

If you’re a highly active athlete, you’ll do fine with body composition and metabolism as long as you’re eating appropriately for your sport and activity level. Extremely active athletes who eat at typical “weight loss diet” levels are killing themselves. Performance will suffer and fat loss may be frustratingly slow, given the amount of exercise being done. If you train like an athlete you have to eat like one.

I’m strongly in favor of a higher activity level, including weight training and cardio training, and fueling yourself to feed that activity. That’s the BFFM approach: burn more + eat more = better nutrient partitioning, better results from training and better body composition than the couch potato who simply eats less.

Therefore, there’s no reason to do hours and hours of cardio a day, chasing after fat loss if you can achieve an equivalent deficit with a more reasonable balance between calories consumed and calories burned.

Tom Venuto, author of
Burn the Fat, Feed the Muscle,
The Bible of Fat Loss
Get Burn the Fat:
www.amazon.com/Burn-Fat-Feed-Muscle-Transform

Related: The Biggest Metabolism Myth: How Many Calories Does A Pound Of Muscle Burn?