Most people believe that if they don’t lift heavy, they’ll never gain any muscle. High rep, light weight training has always been thought of as only for endurance or “toning.” Some people would even say,”Lifting light for high reps is for wimps.” 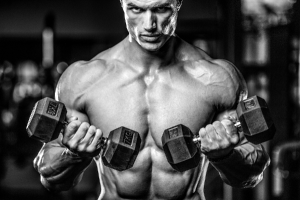 There are some long-revered rules in the practice of weight training that rarely get challenged, and rules about the right amount of weight and reps are among them. For example, you may have heard prescriptions like these:

Basically, the ideal muscle-building range has always been described as 6 to 12 reps (or sometimes the figure quoted for this “hypertrophy zone” is 8 to 12 reps). That’s a moderate or moderately-heavy weight. It was believed for a long time that if the weight is too light (65% or less), it’s just not enough to stimulate muscle growth.

Recent research, however, has challenged this notion that you must lift heavy to gain muscle.

What science now says about building muscle with high reps

In a 2015 study by Brad Schoenfeld and colleagues, training with light weights in the 25 to 35 rep range produced similar muscle growth as training with moderately heavy loads in the 8 to 12 rep range. This was a huge shock to many experts and athletes who believed that heavy training is the only way to trigger growth.

Here’s what these researchers did: Eighteen young men with at least 3 years of lifting experience were recruited. The subjects were randomly assigned to either a moderately heavy (8 to 12 rep) group or a light weight (25 to 35 reps) group.

For 8 weeks, both groups followed a weight lifting program 3 days per week on non-consecutive days (Monday, Wednesday and Friday). They each performed 3 sets of 7 different exercises working all the major muscles, with mostly compound exercises like squats, seated row, bench press, shoulder press and so on).

The only difference was the rep range and corresponding weight loads (the weights were much lighter in the 25 to 35 rep range group, obviously). In addition, the high rep group (which was only using 50% of their 1-rep max weights), trained to failure.

Here’s what they found at the end of the study:

3. Both groups increased their lean mass in the places that were measured – biceps, triceps and quads.

The first two findings were exactly what you would expect: If you train heavier with fewer reps, you’ll gain the most strength. If you train lighter with higher reps, you will develop more endurance, but not as much strength.

The surprisingly finding was number three – that both groups gained equal amounts of muscle size. This goes against what most people have always believed about training for muscle growth. I say most people, because the majority of lifters would tell you, “There’s no way you can gain muscle doing 30 reps with light weights!”

However, history shows us many competitive bodybuilders who went against the grain and included high rep training because they swore it helped them add more size than the heavy training alone. Tom Platz is an example of a famous (now retired) bodybuilder who trained the squat for very high repetitions (20-30 or more) and became known for the best leg development of all time.

Now scientific evidence shows the same thing, and even explains why specifically, the growth is possible.

In the past, critics of this type of research have pointed out (correctly) that if the subjects were beginners, then it’s not unusual that they gained muscle with light weight and high reps because beginners respond to nearly any kind of training. This is known as the “newbie gains.”

But this study was different because the researchers intentionally recruited trainees who had been lifting for at least 3 years. Therefore, newbie gains couldn’t be the reason for their increase in muscle size.

The scientific explanation may have to do with muscle fiber type. There’s more than one kind of muscle fiber and each has different properties, and may be recruited or stimulated in different ways. It’s well known that type II muscle fibers – the fast twitch variety – have a greater capacity for growth than Type I fibers. However, that doesn’t mean Type I fibers can’t increase in size.

Type I muscle fibers are known as slow twitch and they’re associated with endurance training. These fibers take longer to fatigue so it’s reasonable to assume that the increased time-under tension created from the high rep sets is required to fully stimulate them. So it appears that training with light weights (only 50% of 1RM) to the point of fatigue can cause the type I fibers to grow.

Based on these findings, if muscle growth is the primary goal (not strength), it makes scientific sense to train across all the weight and rep ranges to achieve maximum development of every type of muscle fiber instead of training heavy all the time. This is why today we see recommendations for bodybuilders that it’s ideal to do most training in the 6 to 12 rep range, but also include some higher rep, lighter work, as well as some lower rep, heavier work.

But what if the only type of lifting you can do is high rep training?

There are times in life when you may find yourself unable to lift heavy weights.

For example, during the coronavirus outbreak, gyms were closed, almost everyone was forced to train at home, and many people did not have access to anything but light weights (such as a small set of dumbbells).

Or, you might be struggling with a flare up of joint pain, and you can still do weight lifting exercises with light weights, but heavier weights aggravate your pain.

The research suggests that it’s still possible to gain muscle when training only with light weights and high reps, if you do one thing: The key is to train to failure.

Training to failure means you push yourself to keep doing reps until you can’t do another rep with good form. It’s when your muscles literally give out (“fail”) from fatigue.

In the most recent study on this subject, published in the Journal of Strength and Conditioning Research in 2019, male lifters followed an 8-week training program, with the subjects divided into two groups – a heavier weight group (80% of 1 rep max) and a lighter weight group (only 30% of 1 rep max – that’s really light).

There were 4 protocols tested:

Once again, as you would expect, the heavy lifting group increased maximal strength more than the light training group.

However, like the previous study, muscle size increased in both the heavy weight groups as well as the light weight to failure group.

No significant muscle growth was seen in the non-failure light weight group.

That’s a valid point for strength athletes. But for someone like a physique athlete whose priority is muscular development, and strength is only a secondary goal, these findings still support the idea that it’s beneficial to include some higher rep training.

It’s also worth remembering that training exclusively in the heavy weight, low-rep ranges can lead to joint pain over time. Knowing that muscle can be built even with lighter weights is good news and a relief for many trainees who have suffered wear and tear to their joints and still want to keep lifting and gaining muscle.

Before anyone jumps to conclusions about how to change their workouts based on this research, there are a few caveats to consider.

One is that just because the weights are lighter doesn’t mean the set will be easier. The subjects in these studies trained to failure, and doing high rep sets to failure can be painful, and produces what we call “the burn.” That makes even isolation exercises like bicep curls or leg extensions excruciating, and this kind of training on compound exercises like squats and rows is exhausting (it has even been known to make people feel sick or light-headed).

Another is that these results do not mean you should give up training in the lower rep ranges with heavier weights for strength, if you’re able to do so. It simply means there’s now a scientific rationale for adding some higher rep training into the mix. It also means if you’re stuck training only with light weights for any reason, you can still make muscle gains if you work hard enough.

There are downsides to training exclusively with high reps and light weights compared to a combination of heavier and lighter training. But this research has been welcome news for people who can’t train heavy, and has left many bodybuilders feeling vindicated for doing light “pump” sets in addition to their heavier sets, all along.

The biggest take home message is this: If you’re stuck training with light weights and you still want to gain muscle, take those high rep sets to failure! It’s gonna burn, but that’s what it takes.