Some people say baked oatmeal is like a breakfast “casserole.” I’d go as far as describing my protein apple cinnamon baked oatmeal as being like “breakfast apple pie!” 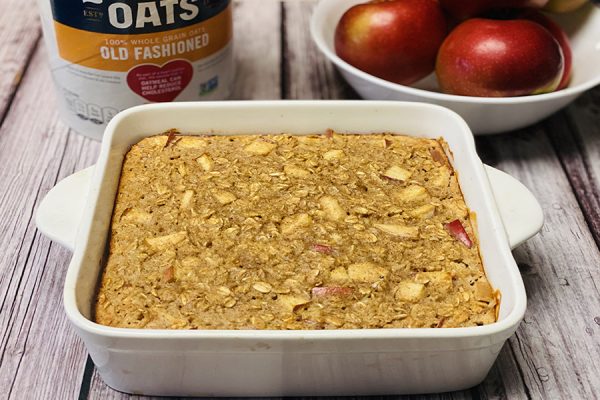 I do admit it, I’m an oatmeal fanatic. And if I have some kind of “eating disorder” it’s that I put protein powder in everything!

I love all kinds of oatmeal and I have dozens of different recipes. The one way I’ve made oatmeal more often than any other is the fastest and simplest way – to microwave it in water (takes less than 2 minutes). Then I stir in protein powders of various flavors.

Some people call this “Proats” (protein oats). I usually add fruit and sometimes nuts or seeds too. Adding protein powder is optional, but that’s what makes proats a complete meal and makes it so quick and easy to prep and eat. If I’m feeling less lazy, I often make oats without protein powder and have eggs on the side for the protein.

But even though I have countless variations on basic microwaved proats, sometimes it gets a little boring. Not only the taste, but also the texture. That’s when I try different oatmeal recipes like oatmeal muffins, oatmeal bread, oatmeal pancakes, oatmeal cookies, or this…

Baking your oatmeal takes longer – 10 to 12 minutes to prep and then 30 to 35 minutes to cook – but it’s well worth it, even if you only have time on the weekends. (Plus, you can make one batch and it will give you 3 or at least 2 servings (as a full meal), so you can prep once and eat twice or thrice), so it’s not like you have to spend 30 to 40 minutes every time.

What’s so great about baked oatmeal? Well, when you bake it, the oatmeal is not a creamy, liquidy porridge, nor is it quite like a solid oatmeal bar, bread or muffin. It’s the perfect middle ground between the two. Some people describe it as being like a breakfast “casserole.”

It’s moist and soft, you can cut it into slices with a knife and eat it with a fork (or even your fingers). This great texture often gets people enjoying baked oatmeal even if they’re not usually oatmeal eaters.

I attempted baked oatmeal before, following some traditional recipes, and it tasted pretty good, but I wasn’t totally satisfied. Most apple cinnamon baked oatmeal recipes it seemed to me, had too much liquid, so while it still was like a breakfast casserole, it didn’t always stick together.

The way I see it, if it comes out of the oven like creamy porridge, then why did you even bother to bake it, right? Why not just microwave or stovetop cook it? To me, baked oatmeal should set on the top and even get a little browned on the edges, so you can slice it into pieces and eat it with a fork.

Baked oatmeal is supposed to include liquid, in this case milk, which gets absorbed by the oats, and any kind of milk will do. However, you can adjust the amount of liquid ingredients and the ratio of liquid to dry to get the kind of texture you prefer. I was thinking, since I used water in my basic microwave oatmeal, that you could use water in this one too instead of milk, but I’m pretty sure the milk adds more creaminess. Plus it adds a little more protein.

It was only after I made my pumpkin spice baked oatmeal that I got the exact texture I wanted, so what I did here was simply duplicate the dry to liquid ingredients ratio in the new and improved apple cinnamon baked oatmeal as well. It was perfect from the very first time I made it! Using the same formula as the pumpkin baked oats worked like a charm.

I’d recommend trying my recipe exactly, but again, feel free to slightly adjust the ingredients to get the texture you like best. (You can also adjust the cooking time slightly in either direction depending on whether you want it more moist or more crisp).

Baked oatmeal is actually very simple as ingredients go – it’s rolled oats and milk along with fruit, plus seasoning and sweetener. It usually includes an egg or a couple egg whites as well for a binder. Baking powder makes it rise nicely. A tiny pinch of salt is a flavor enhancer.

Add protein to your baked oatmeal!

My standard recipe is flour-free and I use protein powder, which acts a bit like flour but also serves the purpose of turning this into a complete macro-balanced meal instead of a carb dominant recipe. (I admit it, I am incorrigible – I put protein powder in everything!) You could make this without the protein, you’d simply have a more moist or liquid end product unless you added flour or more oats, or reduced the liquid ingredients slightly.

I made this in an 8 X 8 square baking dish and it produced a fairly thick slice of baked oatmeal, especially when you use baking powder which makes it rise quite a bit. I’ve used both ceramic and glass. Make a note that if you were to use a much larger dish, the batter would spread out more, you’d have thinner slices and you might have to re-assess the baking time, but I’m guessing the larger rectangular baking dish would be fine (8 X 12).

Thirty minutes at 375 is probably enough time if you want it to stay on the moister side. If you want it to set a bit more then leave it for 35 minutes. Either way, you can tell it’s done and ready to eat when the edges are slightly browned and the top is set or mostly set (still moist in the center but not jiggly). Also remember, baking times can vary based on the oven.

The only downside of baked oatmeal is the time involved. This takes me 12 minutes for prep (10 if I’m speedy), then 30 minutes for baking. Most people also give it 5 minutes to cool before slicing and eating (so it sets a bit more and cuts a bit more easily).

If you’re often in a rush in the morning, you can bake your oatmeal in advance, refrigerate it and then reheat it for a quick weekday breakfast. This refrigerates and reheats great. Most like it hot, but it’s even great cold right out of the fridge. Easily just as good, if not better on day two. I’ve had leftovers in the fridge as long as three days, so I’m not sure from experience how much longer they stay equally fresh. I prefer fresher food, so I rarely leave anything in the fridge more than a few days. I have never tried freezing my baked oats, but like almost everything else, I’m sure they freeze, thaw and reheat fine.

High protein apple cinnamon baked oatmeal is tasty and moist enough to eat completely on it’s own. However, it’s better with a topping (and even more like a dessert for breakfast). 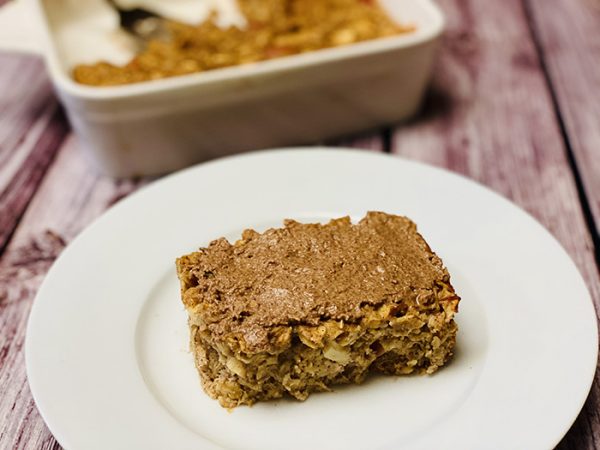 If you like crunchy and have calories to spare you can top this top this with nuts, or maybe even better, add nuts right into the oatmeal mix before baking.

This recipe has HALF the calories of traditional apple cinnamon baked oatmeal!

If you look up traditional versions of baked apple cinnamon oatmeal recipes, you’ll usually see they use butter and sometimes oil (I can’t figure out why so many “health” cooking sites think coconut oil is some kind of superfood and they drown their food in it with gleeful abandon). I’m not saying that oil or butter won’t make baked oats taste richer, but trust me, you don’t need the extra fat or calories. Well, unless you need them. If you’re struggling to put on body weight, then you might just go ahead and have the butter. Then it will be even more like apple pie.

But hey, this is after all the Burn The Fat Blog. If you’re on a fat loss program, especially with a strict calorie budget, then fats like butter are some of the places you can save calories. (You can also save by using calorie-free maple syrup and fat-free milk). If you used butter, regular maple syrup, and whole milk, this recipe wouldn’t be so light anymore.

Make a note that I call this batch of 6 slices “3 servings.” (For most people on fat loss programs, a “serving” is 2 slices with 407 calories total). However, if you’re highly active, or eating for muscle gain, you’ll probably get only 2 servings from this batch (3 slices with 610 calories total). That’s what I do since I have a fairly large calorie allowance (I’m a dude who lifts 5X per week, does cardio, and averages 12K steps a day and often more).

While this takes some baking time, it’s essentially a meal prep recipe for me. I I have 3 slices the morning I make this, and then the other 3 go in the fridge and are ready to reheat the next day (or for second breakfast the same day), with just a couple minutes needed for reheating. This qualifies as a “portable” food, too because you can grab and go.

Feel free to adjust the amount of cinnamon to your liking. This large batch is not overpowered by a full tablespoon of cinnamon but you can use a little less if you choose (or a little more).  If you wish, you could also add a pinch of nutmeg. A dash will do ya with nutmeg – it’s a strong spice.

Get access to my entire collection of over 260 low-calorie, high-protein, fat-burning, muscle-building recipes at www.BurnTheFatInnerCircle.com, along with Burn the Fat Meal Planner software. To read more about “flexible” meal planning, visit: www.BurnTheFat.com.

PS. Looking for apple cinnamon flavors but want something quicker? Be sure to check out: 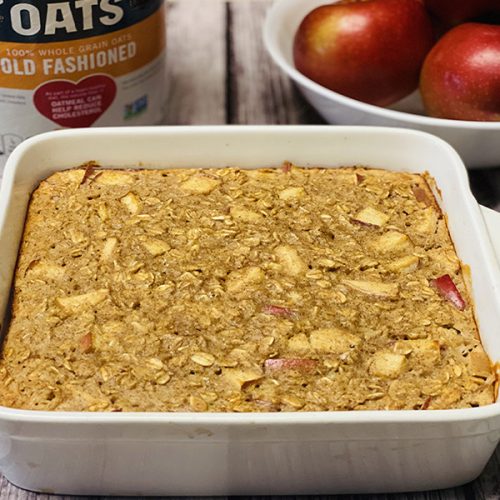 About Tom Venuto, The No-BS Fat Loss Coach
Tom Venuto has been a trusted natural bodybuilding and fat loss expert since 1989. He is also a recipe creator specializing in fat-burning, muscle-building cooking. Tom is a former competitive bodybuilder and today works as a full-time fitness coach, writer, blogger, and author. In his spare time, he is an avid outdoor enthusiast and backpacker. His book, Burn The Fat, Feed The Muscle is an international bestseller, first as an ebook and now as a hardcover and audiobook. The Body Fat Solution, Tom’s book about emotional eating and long-term weight maintenance, was an Oprah Magazine and Men’s Fitness Magazine pick. Tom is also the founder of Burn The Fat Inner Circle – a fitness support community with over 52,000 members worldwide since 2006. Click here for membership details

Disclosure: Burn the Fat Blog posts may use affiliate links to third-party websites and online stores, and earn a commission if products or books are purchased. We never recommend or link to products we haven’t used and fully endorse. However, always do your own due diligence if purchasing from a third party merchant on the internet.