Happy Halloween! You think that horror flick you watched or that haunted house you visited was scary? The most terrifying thing I’ve ever seen was not produced by Wes Craven or found in a theme park, it’s what I see some people do to themselves to lose weight. Take a look at these SEVEN scary diets… but reader beware if you’re easily grossed-out! 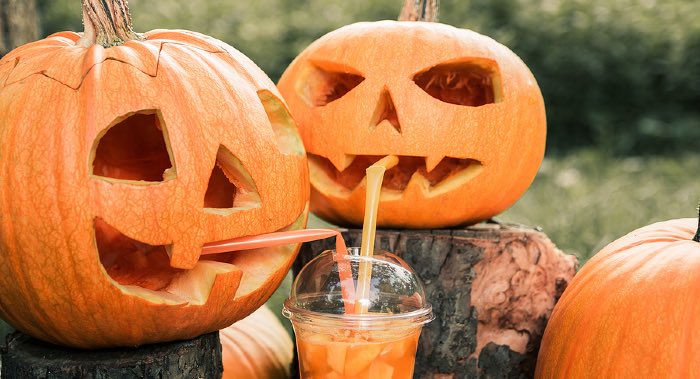 It’s called the KE diet, and it promises that you’ll lose 20 pounds in 10 days.  Sold to brides-to-be as a quick way to lose the last 10, 15 or 20 pounds before the wedding, it involves inserting a feeding tube into the nose that runs to the stomach.

The dieter (“victim?”) is fed a slow, steady drip of protein and fat, adding up to 800 calories per day, and zero carbs. The pitch for this crazy program says that it’s safe and doctor supervised, although the patient is not hospitalized during the diet – they carry the food solution around with them.

According to ABC news, which originally broke the story about this nightmare on diet street, doctors charge $1500 for the 10 day plan. Side effects (in addition to shrinkage of your wallet) include fatigue, bad breath, constipation and strangers staring at the hose in your nose.

Even though this one is so creepy it could be an ideal way for a horror movie villain to slowly torture his victims to death, the tapeworm diet really has been used for weight loss (urban legend says Maria Callas did it).  It came to public attention when the Tyra Banks show did a “gross-out” spot about the diet. Audience members squirmed as the doctor pulled a 15 foot tapeworm out of a jar live on camera.

Purchasing these parasites for weight loss is illegal in the USA and not approved by the FDA, but you can allegedly order (illegally) from countries like Venezuela or go to Mexico and pay a couple grand for beef tapeworm worm larvae.

After you consume the “worm egg pill” it hatches in your digestive tract, latches onto your intestinal wall and feeds off the energy and nutrients from the food you eat, growing larger and larger. After a few months, you return to the clinic for anti-parasitic medication that kills the worm. The dead creepy crawler then passes out your body (try to visualize that if you want to really gross yourself out).

Aside from that fact that it’s vile and disgusting, what’s wrong with this idea? On the mild end, the tapeworm can lead to pain, nausea and a bloated stomach. It can also compete with you for vital nutrients, leading to deficiencies or anemia. At the severe end, the hermaphroditic tapeworm can lay eggs inside you. Infestation of certain species can travel beyond the digestive tract into the circulation and can also lead to cysts in the liver, lungs, eyes and spinal cord or brain.

Using tapeworms for weight loss can be fatal. No source for the story was cited, but according to Spike TV’s “1,000 Ways To Die” a woman lost 60 pounds after ingesting a tapeworm for weight loss. The worm grew to 20 feet then laid eggs, which burrowed through her intestinal wall and into her circulation where the infestation of worms promptly killed her.

This is really twisted. I am not kidding – this makes me think of one of those horror movies with the crazy doctors that perform sinister medical experiments.

According to an ABC news story, a doctor in Venezuela has done 800 of these procedures which involves sewing a patch of plastic mesh onto their tongues. The patch makes it difficult to eat or swallow – it even causes pain if you try to eat with the patch attached.

A cosmetic surgeon in California brought the procedure to the United States after seeing it in Latin America. The doctor charges $2000 for the procedure and promises 18 to 20 pounds of weight loss in 30 days.
How do you get any nutrition or caloric sustenance? The procedure comes with an 800-calorie per day liquid diet of shakes and drinks until the patch comes off.

Yes, I’ve written about this one before because it’s my favorite diet to hate, but no list of horrifying diets would be complete without it. HCG is not a new one – it’s been around since the 1950′s, but there was a resurgence of the HCG diet over the last several years and it’s still out there, promoted in books, on websites and even in doctors clinics. Those diabolical docs make big money selling this stuff.

The HCG protocol is a 500 calorie per day diet combined with injections of a drug called Human Chorionic Gonadatropin or HCG for short. What’s creepy about this one? Aside from the required needles, HCG is actually a fertility drug which is extracted from pregnant women’s urine.

It’s one thing when a diet, drug or supplement has no research saying either way whether it works or not. But HCG has been shown in nearly a dozen controlled clinical trials to be no more effective than placebo, with some of these trials going back to the 1970′s.

Beware if you say something bad about HCG online. HCG true believers come out of the woodwork to defend it like crazed Orcs, grunting about how it worked for them. Well of course “it works.”  The HCG diet comes with a 500 calorie per day food plan. Do the math. The weight loss comes from the starvation level calorie deficit, not the HCG. Which  means… 500 calories a day without the HCG will produce the same results, all else being equal.

The Cigarette (and nicotine) Diet

I was always shocked at how many bodybuilders smoke. On a regular basis, I would walk outside after a bodybuilding contest and to my astonishment see entire groups of competitors puffing away. Whether they continued to smoke because they felt it was easier to get lean, I don’t know, but we’ve all heard about how people struggle with weight gain when they kick the smoking habit.

Well, one day it dawned on some genius that taking up smoking might help with weight loss and the cigarette diet was born. Years ago, they called this the “model’s diet” which consisted mostly of cigarettes and water. Lung cancer for tight abs or a svelte runway model body. Sounds like a fair trade.

What you might not know is that today we have fitness models and bodybuilders adding nicotine on top of their drug stacks and contest prep gurus recommending nicotine supplements to their clients nonchalantly as if it were vitamin C.  “Studies say nicotine may help with fat loss, it’s a stimulant and doesn’t cause cancer – it’s the cigarette smoke delivery system that causes cancer,” the gurus proclaim.

Great, just what we all need – more stimulants, potentially addictive. But moreover, I think the drug culture in bodybuilding and the never-ending desire and search for “something to take” is insane.

Thankfully, this one is not around anymore, but a little history lesson might be instructive (You know what they say about failing to learn from mistakes of history and being doomed to repeat them, right?)

Also known as the Prolinn diet, this plan was created by Roger Linn in the 1970’s. Like so many other diets, Linn concocted a special drink. Some stories about the Last Chance diet say it was a “400 calorie liquid protein beverage” and while the 400 calories per day qualifies as a dangerous starvation diet by itself, the term “liquid protein” doesn’t raise too many alarms for most people these days. But upon deeper investigation into the protein source, the gross part emerges.

This drink wasn’t one of those yummy chocolate peanut butter whey protein smoothies you can get today down at your local Muscle Maker Grill. According to one diet review site, the liquid protein was made from “slaughterhouse leftover byproducts like crushed animal horns, hooves, hides, tendons and bones. Artificial flavors, enzymes and colors are added to make the drink more appealing.”

Sound so crazy that no one in their right mind would try it? Well, it’s estimated that between two and four million people did it. It is most infamously known today because 58 people died from heart attacks while on it. Whether it was the low nutritional quality of the drink or people starving themselves to death, either way, it killed them.

The master cleanse diet may not seem horrible or gross like some of the others on this list, after all, it’s just drinking lemon water for 10 days, right? (lemon water with maple syrup and cayenne pepper to be exact). What’s scary about it is the number of people who have done it – surely in the millions – and how many followed it like sheep just because it became a popular celebrity-endorsed fad (brainwashed hordes qualifies as “scary” in my book).

Although this diet has been around since the 1940’s, it hit the big time in 1976 with Stanley Burrough’s book, “The Master Cleanser.”  After a few Hollywood celebs tried it, it blew up again and is still hugely popular on the internet.  As with HCG, followers are like zombie hordes, screaming for brains if anyone dares to speak out against their sacred diet.

Why the rabid cult following? My guess is there’s a health halo effect when “cleanse” and “detox” are mentioned in conjunction with a weight loss diet. In fact, some people say they do it to cleanse not to lose weight. Nevermind that cleansing and detoxing are scams (meaningless and conveniently vague terms as well), 600 calories per day is just another starvation diet.

Unlike protein-based liquid diets, the master cleanse is horrifically catabolic (I call it the muscle cannibalizing diet. Cannibalism… that’s pretty scary, too!)

Some dieters are proud to have gone through this torture for up to 40 days. Does it work? Sure, if you like looking like a skeleton and being as weak as a kitten.  This one is a real lemon. Try cleansing your refrigerator and cupboards of junk food instead.

Parting advice
I wrote this partly as Halloween week entertainment, but there are some serious lessons to be learned here. It’s about realizing the lengths people will go to lose weight, and how easy it is to get swept up in a fad or look for a shortcut, even if it’s harmful to your health (or downright scary!)

Fad diets aren’t going away. Old ones will be recycled and new ones will be invented, and people who allow their emotions or social influence rather than critical thinking to control their behavior will continue to fall for them. Humans are emotional and impatient creatures, so the temptation to try a fad diet, or even something drastic, may always be there. Fortunately a few simple shifts in your outlook could keep you out of harm’s way and on the right path.

There’s no such thing as a miracle diet, but proper nutrition combined with training and the right mindset is as close to a real miracle as you’ll ever find.

If you want to learn more about this combination of nutrition, training and mindset to burn fat, build muscle and get fitter, stronger and healthier (no scary diets or weird fads), read Burn the Fat, Feed the Muscle  or join us at the Burn the Fat Inner Circle