Bogus HCG drops are still on store shelves – even after the recent FTC and FDA warnings. In today’s post, you’ll understand why these products are the biggest scam in the weight loss industry. Real HCG (Human Chorionic Gonadatropin) is also still being promoted for weight loss – by medical doctors no less. It too is a scam – an even more expensive one. A recent issue of the International Journal of Obesity explained that not only does the HCG plan have no weight loss effects outside the 500-calorie per day  starvation diet it comes with, it also has some serious safety concerns. The authors urged professionals in the health community to “speak out strongly against HCG use.” Gladly, I say… 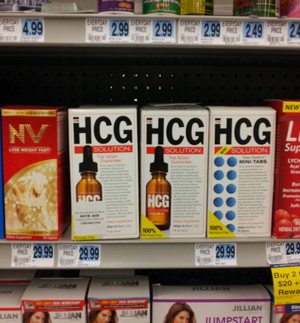 I’ve spoken out against HCG use before and it has always been amusing to see the number of people who show up and defend their weight loss results on the HCG diet. Some are real “characters,” while others appear  sincere, intelligent and willing to engage in a logical debate.
It’s not that I question whether they lost weight while taking HCG. What none of the HCG supporters have ever been able to explain with a grain of critical thinking is why they believe the HCG injections produced their weight loss and not the massive caloric deficit from the diet that comes with it.
They have also not been able to explain the 9 peer reviewed studies which all say HCG does not enhance weight loss and is no more effective than placebo.
It’s frustrating and difficult for legitimate health educators to get through to people about HCG when we’re up against 7.54 million google search results, national TV show coverage and MD’s that are still out to make an easy buck by prescribing this stuff.
But it gets worse than that…
I was just in a pharmacy store in New Jersey yesterday where they have vastly expanded the nutritional supplements and weight loss pills section – it’s like a mini health food store in there – and I saw “HCG” products still on the shelves.
This was not the drug – real HCG is an injection that must be obtained by prescription from a doctor (it’s a fertility drug that is extracted from the urine of pregnant women).
Nevertheless, this product was labeled as HCG and being sold with other over the counter weight loss pills. There was no way for someone uneducated to know the difference. It reminded me very much of the muscle building supplements that are named and marketed to sound like steroids.
For example, “Dianabel – anabolic activator” might be seen on a bottle in the health food store – sounds like the steroid dianabol – and the similarity in name is intentional. Common sense alone should tell you that you can’t buy a steroid in a health food store right over the counter, but skinny teenagers buy this stuff all the time, thinking they are getting steroids. (They’ve heard of dianabol and other steroids in online forums, etc).
So here we have on the same store shelves, boxes of “HCG.” Never mind that the box contains pills or homeopathic drops and that real HCG is a prescription drug administered by injection; people heard about it on a talk show or on the internet and just buy the fraudulent / fake stuff right off the shelf.
This comes even after last year’s Federal Trade Commission (FTC) and Food and Drug Administration (FDA) warnings. Given the FTC and FDA actions, aren’t you SHOCKED that these supplement companies and retail stores are still getting away with this? What are they doing? Just waiting around until the legal notice arrives at every last store?
http://www.fda.gov/NewsEvents/Newsroom/PressAnnouncements/ucm282334.htm