The Ultimate Guide to Skinfold Calipers And Body Fat Testing

“Get those vice grips of death away from me!” Cori said. I chuckled and replied, “Oh come on, they’re just harmless skinfold calipers for body fat testing. Pinch an inch, you know?” She continued to protest, “That’s the problem, I don’t have an inch, I have a handful! Yuck!  Do we really have to do this?” 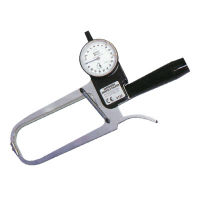 “Nope. You don’t have to do anything you don’t want to do” I assured her. “But listen – you signed up for this 12-week fat loss program, and you know from reading the Burn the Fat book how valuable body composition stats are for tracking your progress…”
“You should look forward to ‘pinch day’ because this is your motivation. This is your accountability. When you know we’re going to measure your body fat and weight every Monday, you’re going to work harder every week, I guarantee it.” Reluctantly, she agreed, “I know. You’re right. Ok, pinch away…”
If You Want To Improve It, Track It!
I’ve had many humorous conversations like I did with Cori over the years when I broke out the calipers to measure body fat percentage. With few exceptions, those chats usually ended the same way – no one ever denies the importance of tracking body composition instead of just body weight. They sometimes simply felt a little uncomfortable about someone grabbing their fat.
But after they started doing it, and they saw the results of accountability in action, they were sold!
The problem is, my time with a personal client comes to an end eventually and then they’re off on their own, free to continue measuring progress for accountability’s sake, or free to stop tracking. I believe that when people stop setting goals, and stop self-monitoring their activities and their progress toward those goals, that’s a big part of the reason why relapse rates are so high.
How can a 12-week coaching program  or a 7-week body transformation contest produce such spectacular results, and the day it’s over, the results come to a screeching halt or even slip back in the exact opposite direction? Here’s one simple answer: You stopped doing what got you those results in the first place (no lifestyle change) and you let yourself off the hook (no accountability).
I understand that not everyone has the budget to work with a personal trainer or fitness coach forever. If you can, you’ve got the accountability times two, and I’d recommend you take advantage of it by asking your trainer to track your body fat at regular intervals. If you can’t, the good news is, you can coach yourself and test your own body fat, and you’re about to learn how.
The simple idea here is to measure and track everything you want to improve. If you want to improve your body composition and reduce body fat, then measure and track body composition and body fat. Tracking body weight is helpful, but doesn’t give the full picture – it doesn’t tell you what your weight consists of – muscle or fat.
There are many different ways to measure your body fat percentage. This post will be devoted to the skinfold  method.
How Skinfold Testing Works
You store the majority of your fat, rather inconveniently, right on top of your muscles (obscuring the definition), and right below the skin. This is known as subcutaneous fat.  You store fat internally as well, but since the majority of your fat is below your skin, you can use skinfold measurements to estimate your overall body fat percentage.
The test really is as simple as “pinch an inch.”  All you need is a skinfold caliper, a vice-like device that pinches the skinfold and measures the thickness in millimeters.
After taking one or more measurements at various sites around the body, you can convert that sum of the skin folds into a body fat percentage using a math equation or an easy conversion chart that has already done the math for you. Some electronic calipers have the formulas built in, so they automatically display a body fat percentage right on the digital screen.
The purpose of this post is to show you some of the popular skinfold calipers, ranging from expensive professional models that are usually only used by trainers or health clubs, to super cheap plastic calipers that you can use at home.
Skinfold Calipers, Reviewed
There are more types of body fat calipers than I have time to review in this post, so what I’ll do instead is list the 5 calipers that I have personally used over the years, which also happen to be the most commonly used calipers. This way, I’ll be able to speak from experience.
I will also explain the pros and cons of specific calipers as well as pros and cons of skinfold testing technique  in general – including addressing the common criticisms of body fat testing that lead some people to say, “don’t bother” (I disagree… but more on that later). 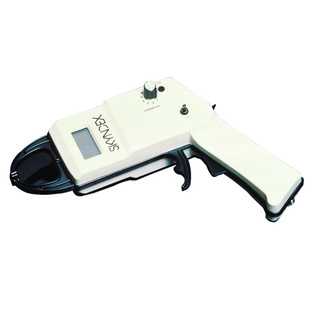 Skyndex Caliper
I was first introduced to the SKYNDEX caliper when I was working for Gold’s Gym in 1991. For professional use (as a trainer and fat loss coach), it’s my caliper of choice for testing other people.
The Skyndex  is unique among calipers because it’s electronic. As you pinch the skinfold, you can see the thickness reading in millimeters on a digital readout. The precision is impressive – it measures the skin folds to the tenth of a millimeter (example 7.3 mm and so on).
Some argue that measuring skinfolds to the decimal point is moot, owing to the margin for error inherent in body fat testing. But personally, if a caliper offers that kind of precision, I like it, and I believe other experienced technicians will appreciate it too.
You can order the SKYNDEX with two different formulas for adults: The Durnin 4-site formula (bicep, triceps, iliac crest and subscaplular) or the Jackson Pollock 3-site formula (abdominal, thigh and pectoral for men or thigh, iliac and tricep for women).
Before another art aficionado gets confused or angry, let me assure you, Jackson and Pollock are a couple of researchers who published body fat equations in nutrition and exercise science journals in the late 70s and early 80’s. Jackson-Pollock is a different dude who artistically splattered paint on canvases.
I use the caliper with the Durnin formula. Usually, the Durnin formula is recommended for the general population, while the 3-site Jackson Pollock formula is recommended for lean, athletic types.  This is just my opinion, but I find the Durnin skinfold sites much easier to pinch.  The abdominal and especially the thigh skin folds can be tricky. On many people I have noticed that a nice skinfold cannot be easily pinched off the thigh, so I’ve always felt that I could get better accuracy and consistency with the Durnin skinfolds.
Whether I was testing a lean athlete or not with the Durnin formula never bothered me because body fat testing is more for charting progress from one reading to the next than it is for testing absolute accuracy. If you wanted the most accuracy in analyzing body fat tissue, you’d have to use the dissection method. Of course you have to be a cadaver for that…
If there is a downside to the Skyndex  caliper, it’s the high cost. The retail price is around $500. If you shop around online however, you can usually find one priced under $400. 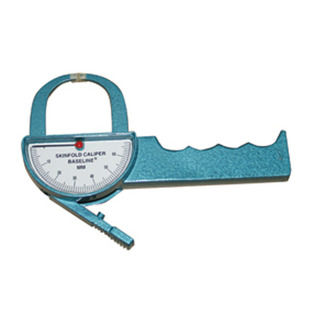 Lange Caliper
Known as “the green caliper,” almost every exercise science student and personal trainer certification candidate is familiar with this one.  I used this one myself when I was taking exercise science classes in college, when I took workshops for the American College of Sports Medicine certification and at various gyms I’ve worked at over the years.
This is another professional grade caliper that, if it’s not the gold standard, it’s certainly the most popular.
What makes a professional-grade caliper professional grade, aside from sturdy metal construction (as opposed to plastic), is the fine-tuned calibration and constant spring-loaded pressure of 10 gm/sq millimeter over the entire operating range.
The Lange skinfold caliper is not digital, it uses the traditional gauge readout, where a needle points to the millimeter reading on a scale.
This doesn’t make the Lange less accurate than a digital caliper like the Skyndex, it simply means there are two steps to take before you know your body fat. Step one is taking the skinfold measurements. Step two is adding up the sum of the skinfolds and looking it up on a conversion chart to find the body fat reading. The Skyndex does the conversion for you.
The caliper jaws open to 60 millimeters, so if you have a handful and not an inch, not to worry, you’ve covered!  (if your skinfolds are in that range, however, you’ve got work to do!) Price: $225-$250 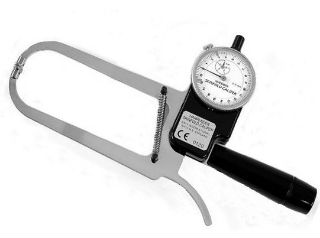 Harpenden caliper
Harpenden is not just a town in England, it’s also a skinfold caliper that has been used since the 1950’s.
The Harpenden caliper works almost the same way as a Lange, it simply has a different design. You could say it’s a competitor (or alternative) to the Lange caliper.
Some health and fitness researchers and practitioners call this the gold standard caliper or at least the most prestigious.
Studies have compared the Lange and Harpenden calipers and found the results were similar, both calipers being able to accurately measure body fat without error due to caliper design.
Researchers have noted in these comparison studies that both the Lange and Harpenden tended to underpredict body fat when compared to Hydrostatic weighing.
As a pro-grade caliper, this one has a hefty price tag considering there’s no computer in it. It retails for around $400.
I have to admit, these do look a bit like “vice grips of death.”  But I promise, the pinch doesn’t hurt (unless of course you went overboard on that deep dish pizza and it’s sticking to your hip bone on fat testing day… then hearing the news about your test results might be “painful”). 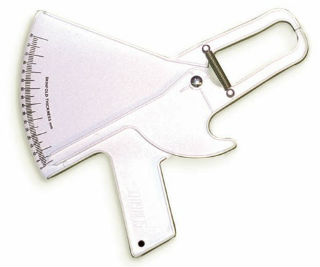 The Slimguide
Now we’re getting into the consumer-grade calipers and the price difference is so drastic, you’ll see why these calipers are called “consumer grade.”  The Slimguide is a bargain for $20 retail, and if you shop around you can find it even cheaper.
Construction is one reason for the bargain price – this caliper is made out of all plastic with a metal spring for the proper caliper grip tension.
Years ago, I did my own little “study’ and I tested a few subjects with the Skyndex, Lange and Slimguide calipers back to back. I found the measurements provided by this caliper astonishingly consistent with the much pricier Skyndex or the Lange calipers.
Even if the results aren’t as high in absolute accuracy, as long as you can continue to get consistent measurements from week to week, that’s what matters most and these calipers do a fine job at that.
These calipers are ideal for personal use if you are testing other people at multiple skinfold sites (such as with the Jackson Pollock or Durnin Formula) or if someone else will be testing you at home.
[Available at Amazon.com:  www.amazon.com/Creative-Health-6575XXXX-Skinfold-Caliper/dp/B000NN9SDO/] 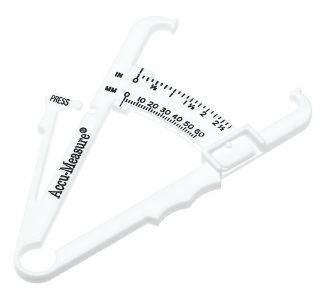 Related Articles:
Your Scale is a a Liar, But Don’t Throw It Out
How to Lose 20 Pounds, Really, Really, Really Fast
The BMI Is BS: How The Weight Loss Industry Used The Wrong Measuring Stick

Burn the Fat Blog is an affiliate of AccuFitness [disclosure]