Why Cardio Doesn’t Work For Some People: A NEAT Explanation

At the Burn the Fat Inner Circle earlier this week, I received a question from a member which comes up with alarming frequency: “Why isn’t my cardio working?”  Despite not only doing regular cardio for weeks, but actually increasing the duration of her workouts, she still saw no added fat loss and started wondering what she was doing wrong… or what was wrong with her!  I gave her the surprisingly simple answer, which I’ve printed for you as well in today’s blog and new research has added even more to the answer – it’s a NEAT explanation…

How is it possible that some people do tons of cardio and don’t lose weight? 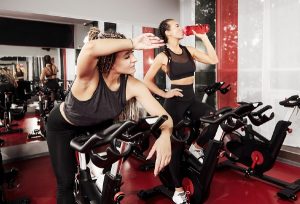 Simple: Weight loss is a function of caloric deficit, not how much cardio you do. Cardio is only one of the tools you use to create and increase a caloric deficit.

They might train for one, two, even three hours or more on some days, but they’re often not trying to lose weight. They (have to) eat huge amounts of food to fuel their training and keep their weight stable.

It’s not unusual for a cyclist to burn 4000 or 5000 calories per day and not lose any weight. With all that cardio, why not? Same reason you’re doing a lot of cardio but not losing weight:  there’s no calorie deficit. Calories coming back in are equaling the calories out.

What you need to do is shift your focus off of some kind of prerequisite time spent doing cardio and on to the real pre-requisite for weight loss: a caloric deficit.

If your caloric intake remains exactly the same and you add cardio or other training or activity you will create a deficit and you will lose weight, guaranteed.

With all this talk about “cardio” and “training” one important area that people often forget about is all the other activity in your life outside of your cardio and weight training. There’s a name for that:

NEAT is all your physical activity throughout the day, excluding your “formal” workouts.

NEAT includes all the calories you burn from casual walking, shopping, yard work, housework, standing, pacing and even little things like talking, chewing, changing posture, maintaining posture and fidgeting. Walking contributes to the majority of NEAT

It seems like a bunch of little stuff – and it is – which is why most people completely ignore it. Big mistake.
At the end of the day, week, month and year, all the little stuff adds up to a significant amount of energy.

For most people, NEAT accounts for about 30% of physical activity calories spent daily, but NEAT can run as low 15% in sedentary individuals and as high as 50% in highly active individuals.

I’m always telling people to exercise more – to burn more, not just eat less. This is not only for health, fitness and well-being, but also to help increase fat loss.

But some people say that increasing exercise doesn’t always work and they quote from research to make their case.  It’s true that some studies paradoxically don’t show better weight loss by adding exercise on top of diet.

But there are explanations for that…

If you add training into your fat loss regime but you don’t maintain your nutritional discipline and keep your food intake the same, you remain in energy balance. If a study doesn’t monitor this type of compensation, or if the researchers trust the subjects to accurately self-report their own food intake (hahahahahaha!), it will look like the exercise was for nothing.

In studies where the food intake was controlled when exercise was added… surprise, surprise, weight loss increased!

Stated differently, all these “experts” who keep saying that exercise doesn’t work for weight loss are  ignoring or not understanding the concepts of calorie deficit and energy compensation.

So a handful of people exercise and then eat more than they were eating before and then scratch their heads and wonder why they aren’t losing. Duh!

Or, they go on some idiotic crusade against exercise, usually while simultaneously promoting their latest diet fad. “See!” they proclaim, “Exercise is a waste of time… all you have to do is avoid these 3 evil foods and eat these 3 magic foods!”

Wrong. Dieting alone is the worst way to lose weight because without training, the composition of the weight you lose is not so good (goodbye muscle… hello skinny fat person). Want to avoid skinny fat syndrome? It’s nutrition, then weight training, then add in and manipulate the cardio as your results dictate.

There’s another type of compensation that researchers have recently started studying.  When people increase their training, especially high intensity training, sometimes they also compensate by moving less later in the day and in the days that that follow!

For example, you work out like an animal in the morning, but then instead of your usual walking around and doing housework the rest of the day, you crash and plop your tired body in your Lazy Boy for a nice nap and a marathon session of Netflix. The next day, the delayed onset muscle soreness (DOMS) sets in and then you really don’t feel like moving!

Research on NEAT is extensive and it tells us that NEAT plays a major role in obesity and fat loss. Finding ways to increase NEAT along with formal exercise can be a promising strategy to increase your total daily calorie burn and thus, increase fat loss.

The flip side of that equation is finding ways to avoid decreases in NEAT that we might not have been aware of. Because NEAT is so completely off most people’s radars, most people miss this. (NOTE: For a real eye-opener, try a using a step tracker for a while)

Previous studies have confirmed that many people compensated and decreased their activity (NEAT) during the remainder of the day or on rest days after exercise training. This led anti-exercise pundits once again to spit out their party line, “See, exercise doesn’t work! You might as well just diet.”

However, a study published in Medicine and Science in Sports and Exercise found no immediate debilitative effect on NEAT on the day of exercise or on the following 2 days. In fact, there was a delayed reaction and NEAT actually increased 48 hours after the exercise session (60 minutes of treadmill walking at 6 kph @ 10% grade with 5 minute intervals at 0% grade).

Why the conflicting findings? Scientists aren’t 100% sure yet, but they have discovered that part of it has to do with exercise intensity.

You sometimes hear certain trainers claim that only high intensity exercise is worthwhile and everything else is a waste of time or at best inefficient. That’s not always true, on many levels, and one of them involves NEAT.

Am I saying you shouldn’t do high intensity exercise? Not at all.

High intensity training can be very effective and very time efficient and a mix of high and lower-intensity training might be ideal. But if you do a lot of high intensity training, you have to be aware of how OVER-doing it might affect your energy and activity level outside the gym – on the day of training, and even in the days that follow the intense workout. Otherwise, you might end up with fewer total calories burned at the end of the week, not more.

1. This study supports the role of exercise for weight loss and debunks the idea that exercise doesn’t work for weight loss, provided all else remains equal when exercise is added on top of diet.

2. Exercise intensity can affect NEAT for days after a workout is over. Too much high intensity work might zap your energy and activity outside the gym, resulting in a lower level of NEAT. You have to keep up your habitual activity level outside the gym after pushing yourself hard in the gym.

3. This information supports the role of low to moderate intensity exercise (like 40-60 minutes of treadmill walking) based on the effect this has on your activity outside the gym. It is not true that only high intensity training is worthwhile. There are pros and cons of training at various intensities. This is one of the pros of lower intensity exercise.

5. It’s important in research to look beyond short term results (during a workout bout, 24 hour studies, etc), and also consider longer term effects. We should watch out for more studies on NEAT that go beyond 24 hours to learn more.