Guest Blog by Jamie Hale. The late Robert C. Atkins is the author of Atkins’ New Diet Revolution.  Atkins is also the founder and former director of the Atkins Complimentary Medicine in New York City. The diet is a low carbohydrate high fat diet with no restrictions on fat intake. 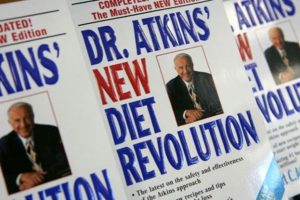 The diet begins with an induction phase (ranging from 2-36 weeks) limiting carbohydrate intake to only 20 g/d.  The consumption of fruit, bread, pasta, grains, starchy vegetables, and dairy other than cheese, cream or butter are prohibited in this phase of the diet.

There are two phases following the induction phase where daily carbohydrate intake is increased in weekly increments of 5gms & 10gms (Aragon, 2007; Hale, J 2007).  Then, comes the maintenance phase, where dieters generally consume between 40-90 g carbohydrates (Goodwin, 2010).

Proponents of high-fat, low-CHO (carbohydrate) diets dismiss the notion that caloric intake is important to either weight gain or weight loss (evidence contradicts this claim).  They claim that “most overweight individuals do not overeat”, even as they suggest that high-CHO meals leave individuals less satisfied than meals that contain adequate fat, resulting in increased hunger and increased food intake.

With respect to weight loss, Atkins claims that on a low CHO diet there are “metabolic advantages that will allow overweight individuals to eat as many calories as they were eating before starting the diet yet still lose pounds and inches” (Freedman et al., 2001).  Furthermore, proponents contend overproduction of insulin, driven by high CHO intake, is the cause of the metabolic imbalance that underlies obesity.

The over exaggeration of insulin’s role in obesity is not uncommon, and is often suggested by many of today’s most popular nutrition gurus, in reality this issue has been blown out of proportion.  Golay et al. (Freedman et al., 2001) reported subjects consuming 1000 calorie diets containing 15% CHO had significantly lower insulin levels compared with those consuming 45% CHO, yet there was no difference in weight loss between the two groups. Similar results have been found in other studies.

Studies cited by Atkins to support his contentions were of limited duration, conducted on a small number of people, lacked adequate controls, and used ill-defined diets.  Some of these, as well as other studies, actually refute the contention that low-CHO diets, in the absence of calorie restriction, provide a metabolic advantage.

Another important consideration is the water loss that occurs with the Atkins plan.  In the early stages of the diet you can expect a substantial loss in water (due to glycogen depletion, for every gram of glycogen you store you also store 2.8 – 3.5 grams of water).  The belief that there are some magical metabolic advantages to this diet is a fallacy that is not supported by scientific data.

The newest version of the diet promotes the intake of high-fiber foods; which is a good thing (in most cases).  Many people who have followed the diet now realize dietary fat is not the sole reason people are fat nor is it the evil often promoted by low fat diet advocates.

In conclusion, if you can stick to the food recommendations and function well while following a low carbohydrate diet, the Atkins diet may be for you.  Athletes using the Atkins’ diet should be highly cautious as performance may suffer (decreased performance happens generally in glycolytic athletes- athletes who’s primary fuel source is stored glucose – glycogen).

Any diet that results in weight loss generally enhances health markers.  If you are following the Atkins plan and are not dropping weight pay close attention to lipid (cholesterol, triglyceride) levels.

If you are gaining weight, reduce calories further or try something different.

Jamie is the author of Should I eat the yolk?: Separating Facts from Myths to Get You Lean, Fit, and Healthy (a paperback or kindle ebook)
References

About The Author
Jamie Hale is a sports conditioning coach, author, outdoor enthusiast and fitness and nutrition consultant. He is the owner of MaxCondition Training and MaxCondition Nutrition. He has contributed to numerous exercise and sports publications (nationally and internationally) and has authored six books. Jamie is a member of the World Martial Arts Hall of Fame in recognition of his conditioning work with martial artists. He is considered by most in the industry as a specialist in agility and comprehensive fitness training. He is also known for his ability to get bodybuilders lean and dry as bone for competition. To learn more about Jamie, visit his website at www.MaxCondition.com and or contact him at (859) 749-2695. He is also available for seminars and camps