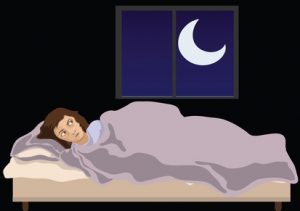 Numerous studies, many conducted just in the past year, have provided convincing evidence that lack of sleep is a risk factor for fat gain and obesity. A study from Finland published in the International Journal of Obesity revealed that various types of sleep problems such as difficulty falling asleep or staying asleep, were also associated with obesity. In a new development, this effect appeared in women, but not in men. More on that in a minute, but first a recap of what the research has told us so far…

Previous studies have suggested that the reason for fat gain due to sleep curtailment may be largely due to hormonal factors that make you eat more and burn less.
Here are some of the consequences of sleep restriction related to body composition and obesity that are known so far:

A review study from the University of Chicago explained:

“Experimentally induced sleep loss in healthy volunteers decreases insulin sensitivity without adequate compensation in beta-cell function, resulting in impaired glucose tolerance and increased diabetes risk. Lack of sleep also down-regulates the satiety hormone leptin, up-regulates the appetite-stimulating hormone ghrelin, and increases hunger and food intake. Taken together with the epidemiologic evidence for an association between short sleep and the prevalence or incidence of diabetes mellitus and/or obesity, these results support a role for reduced sleep duration in the current epidemic of these metabolic disorders.”

Given the prevalence of sleep restriction today, combined with abundance of calorie dense and easily available fast food and the presence of eating triggers and high stress in today’s society, the fact that lack of sleep can increase appetite is an especially big concern

If the idea of insufficient sleep increasing the risk of fat gain doesn’t bother you, then how about losing your hard-earned muscle while dieting? A Dutch study last year found that getting an adequate quantity of sleep contibutes to the maintenance of lean body mass during times of decreased energy intake (dieting).

In the study titled, “Insufficient sleep undermines dietary efforts to reduce adiposity”, the researchers acknowledged that sleep loss can mess with both sides of the energy balance equation: increasing energy intake and decreasing energy expenditure. They wanted to find out whether sleep restriction makes these negative effects worse when you’re on a reduced-calorie diet. Not only was their hypothesis confirmed, they also made the disturbing discovery that with insufficient sleep, more of the weight loss comes from lean tissue:

“Sleep curtailment decreased the proportion of weight lost as fat by 55% (1.4 vs. 0.6 kg with 8.5 vs. 5.5 hours of sleep opportunity, respectively) and increased the loss of fat-free body mass by 60% (1.5 vs. 2.4 kg). This was accompanied by markers of enhanced neuroendocrine adaptation to caloric restriction, increased hunger, and a shift in relative substrate utilization toward oxidation of less fat.

It was concluded that the amount of human sleep contributes to maintaining fat-free body mass when calories are reduced while dieting. Lack of sleep can undermine your efforts to maintain your muscle while youre losing weight.

Evidence from Maastricht University researchers in the Netherlands revealed that sleep restriction could be contributing to the obesity crisis in children as well as adults.

This was alarming not only because of the increase in childhood obesity in recent years, but because this study also found that during the pubertal years, children/teens sleep about 2 hours less than the recommended amount.

Now, here’s the latest in the sleep – body fat story:

The recent Finnish study was a large scale, longitudinal cohort study of women and men (more women than men) conducted by survey over 5-7 years, with 8960 participants.

Participants were surveyed about sleep problems including:

Waking up tired after a normal night’s sleep was not associated with weight gain.

Problems falling asleep and problems staying asleep were associated with weight gain – and the association showed a dose-response relationship.

Of particular interest, the association of sleep problems and weight gain was found only among women and not men.

This was a survey study so it doesn’t show cause and effect, only associations. In fact, the gender differences may have simply been due to a larger proportion of the subjects being women (not enough men in the survey for strong statistical power).

However, these novel findings might raise an eyebrow among women who struggle with sleep problems and weight gain. It will be interesting to keep an eye out for new experimental research on the effects of sleep insufficiency and sleep problems exclusively in women.

Lack of sleep can affect us all, and it looks like certain sleep-related problems can be added to the list of factors that increase risk of weight gain. This new information suggests that women be especially diligent about taking steps to assure adequate sleep quantity and quality and address any sleep problems they have to the best of their ability.

Improving sleep habits has been the subject of entire books, but the suggestions below are among the most tried and true:

1. Sleep at least 7 and preferably 8 hours a night
2. Avoid oversleeping (studies show increased obesity risk with too much sleep as well as too little)
3. Go to bed and wake up at the same time every night
4. Get to bed early and get up early, if possible, to maximize sleeping nighttime (dark) hours and waking daylight hours
5. Sleep in a totally dark room
6. Avoid alcohol before bedtime
7. Avoid caffeine or other stimulants late in the day

Last but not least, you don’t see sleep aids on this list for a few reasons. One, I’m not an expert on sleep aids. Two, I’m not the type of person who recommends pill popping as a solution to every problem. Three, a recent sleep study in the journal Obesity Reviews expressed concern that people would read all this new information about the sleep-obesity correlation and use sleep aids as a crutch…

Recommendation: accomplish items one through seven above first before even thinking about what pill to take. Consult a doctor or health care professional if you have serious sleep problems.