I recently read a book about mindfulness and being “present.” The premise was that by learning to  love the process, you’ll avoid self-judgement, eliminate impatience, end boredom, reduce stress, feel calmer, experience self-discovery, enjoy the journey and be happy. Achieving your goal will simply be a natural by-product. Sounds pretty good! But is being process-oriented really better than being goal-oriented? 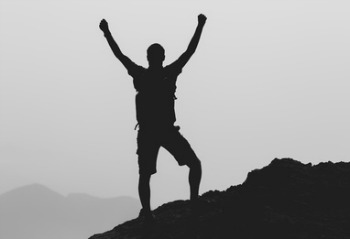 The book I most recently read on this subject was called The Practicing Mind.

1. Keep yourself process-oriented.
2. Stay in the present.
3. Make the process the goal and use the overall goal as a rudder to steer your efforts.
4. Be deliberate, have an intention about what you want to accomplish, and remain aware of your intention.

I enjoyed the book and I think these are great rules.  A book with a similar philosophy that’s been a longtime favorite of mine is Mastery, by George Leonard. Leonard wrote, “If there is a certain way to success and fulfillment in life, it is found in the long-term, essentially goalless process of mastery.”

A lot of people have read books or articles giving similar advice about staying in the present and being process-oriented.  All too often, unfortunately, the message morphs into headlines that say, “Goals suck” or “Stop setting goals!”

In our internet age, I suspect that some writers are simply baiting for clicks, but the fact is, many people believe that to be process-oriented means you can’t be goal-oriented as well (or that you shouldn’t be).

To discourage being goal-oriented because you encourage being process-oriented is a short-sighted and incomplete approach. The idea that you shouldn’t set goals doesn’t even make sense.

Without a goal, there is no process!

You reverse engineer the process (your plan or system) from the goal. That’s why developing strong goal-setting skills is a major part of being successful.  Goal setting is not the only step, but it is always the first step.

This may only be semantics, but if you think about it, the process is accomplishing a series of short-term goals every day, leading you to the long-term goal. If the daily action steps (the practice or process) are framed as short-term goals, then it’s fair to say that success is all about goals isn’t it?

Brian Tracy, author of 60 books and hundreds of business and personal development programs once said, “Success is goals, all else is commentary.” He also said, “If I were given only five minutes to speak to you and I could convey only one thought that would help you to be more successful, I would tell you this: “Write down your goals, make plans to achieve them, and work on your plans every single day.”

If you look carefully, you can see that Brian’s advice incorporates both goals and process, and naturally, goals come first.
Once your goals are set, then you can focus more on the daily process of executing your plan, but you must keep your goals in mind as well.  Lose sight of your goal and you lose focus and get easily distracted. If you lose touch with reasons why you want to achieve your goals, you lose your drive, especially when the going gets tough.

I believe you can do both – be goal-oriented and process-oriented and that they don’t oppose each other – they work together and enhance each other. I also believe these are mindsets, not fixed personality traits.

When I was younger, I was focused primarily on winning and achieving goals. I’ll never forget how mad I was when I took second place at my first bodybuilding contest at age 20 – the Natural Lehigh Valley Championships. I was so pissed, I don’t think it was the positive experience it could have been.

On a bright note, it motivated me like crazy and I won the next three in a row. I was on top of the world. But then I got blown out in a bigger contest and it completely took the wind out of my sails.

As I got older and matured, I discovered the benefits of focusing more on the process and I learned to enjoy training and healthy eating for its own sake – even the grind, the work, the discipline. I also learned to focus on self -improvement above all else.

Seven years later, I competed as a lifetime natural bodybuilder in a National Physique Committee (non-drug-tested) competition in New Jersey. I was in the best shape of my life and I nailed my peak. I took second place. I didn’t lose. It was not a failure. It was one of my proudest, happiest and most satisfying moments.

My shift to a more process and personal improvement-focused mindset is probably also a big reason why I’m still training and loving it, almost 30 years later, and can’t imagine ever stopping, even though I don’t compete anymore.

I don’t believe either approach is right or wrong. Each has advantages and disadvantages depending on the situation.  The problem is embracing only one of them, all of the time.

When you’re exclusively goal-oriented, it can make you feel like you’re always striving but never arriving.  If you define success as reaching a goal and nothing else, then you won’t be happy or feel successful until you get there, even if you’re moving in the right direction.

If you fall short of a goal or don’t achieve it by a certain time, you may feel like a failure (and you miss the lessons you could have learned). If you enter a competition and don’t win or at least perform well, it crushes your confidence and diminishes your sense of self-worth.

Even worse, people with extreme goal-orientation are more likely to cheat or do something unhealthy. For bodybuilding goals, that might mean taking drugs. For fat loss goals, it might mean going on crash diets. This often leads to short-term success, but long-term failure.

When you finally reach your destination, ironically, it feels anti-climactic or empty and the satisfaction is fleeting. Then, one of two things happen: You start the cycle of striving, but not arriving all over again, or you  reach the goal, and seeing that as an end, you stop. For people with weight loss goals, that happens all the time, and it’s the beginning of inevitable relapse.

(That’s also why having fat loss as your only goal is not such a great idea. Having health goals, fitness goals, getting involved in athletics, or at least thinking of yourself as an athlete and pursuing training as a craft is a lot more likely to keep you engaged.

Fat loss is not a sport. Fat loss is a short-term goal, not something you want to do your whole life).

On the other hand, being purely process-oriented is not all it’s cracked up to be either, despite the piles of books and blog posts extolling its virtues.

It has been suggested that if you focus on the process, the results will take care of themselves.  When you’ve got a great process, which was developed from first setting well-formed goals, there’s a lot a truth to that. But focusing on process alone does not guarantee you’ll automatically reach your goal. As Winston Churchill once said, “However beautiful the strategy, you should occasionally look at the results.”

Focusing on process without checking your progress is a recipe for drifting off course or wasting time heading down the wrong path. You have to get feedback, learn from mistakes and make course corrections along the way. This doesn’t mean being obsessed with the outcome, but it does mean evaluating your progress at regular intervals to make sure you’re on the right track. You do that by measuring results.

Top achievers have two rules of their own: #1: Measure everything you want to improve. #2: Performance improves when performance is measured. This does not mean obsessing about your scale weight or body fat percentage (though research says frequent weigh-ins do lead to greater fat loss and maintenance success). It also means measuring the day-today workout performance and nutrition – yes, tracking your progress on the process.

The most successful people I have ever met are intensely results-oriented. They are master goal setters. At the same time, they’re also process-oriented. They’ve honed their ability to focus on the work they’re doing in the present moment.
They look at their endeavors like they were climbing a mountain, as Harold V Melcher once wrote:

“Live each day as you would climb a mountain. An occasional glance toward the summit keeps the goal in mind, but many beautiful scenes are to be observed from each new vantage point. Climb slowly, steadily, enjoying each passing moment; and the view from the summit will serve as a fitting climax for the journey.”

These high achievers might tell you they love to win or reach goals, but reaching big long-term goals is not their end-all-be all or how they define their self-worth or success. They concentrate on hitting the small daily goals and by doing so, they know they’re moving toward their big long-term goal and that’s what makes them feel successful and satisfied.

To the person who is both goal-oriented and process oriented, winning or reaching a goal is not an end point, it’s a stepping stone along the path of never-ending improvement and mastery of a craft.

Earl Nightingale and Jim Rohn, two pioneers in the personal development movement, both had similar definitions of success. Respectively:
“Success is the progressive realization of a worthy goal or ideal,” and “Success is steady progress toward your personal goals.”

The brilliance of these definitions is that they embrace both the goal and the journey. They also imply that if you want to be successful, the journey must never end.

My hope and wish for you is that you set big, challenging goals and achieve them, but most of all, that you learn to love the process and never stop doing it.

PS. If you want to learn more about how to effectively set goals and train your mind for success, be sure to read chapter 6 in Burn the Fat, Feed the Muscle. One of the best-selling fitness and fat loss e-books of all time, the new edition is now available in audiobook and hardcover formats: http://amzn.to/2qufp21