High Intensity Interval Training, or HIIT for short, has been promoted as one of the most effective training methods ever to come down the pike, both for fat loss and for cardiovascular fitness. One of the most popular claims for HIIT cardio is that it burns “9 times more fat” than conventional (steady state) cardio. This figure was extracted from a study performed by Angelo Tremblay at Laval University back in 1994. But what if I told you that HIIT has never been proven to be 9 times more effective than regular cardio? What if I told you that the same study actually shows that HIIT is 5 times less effective than steady state cardio??? Read on and see the proof for yourself. 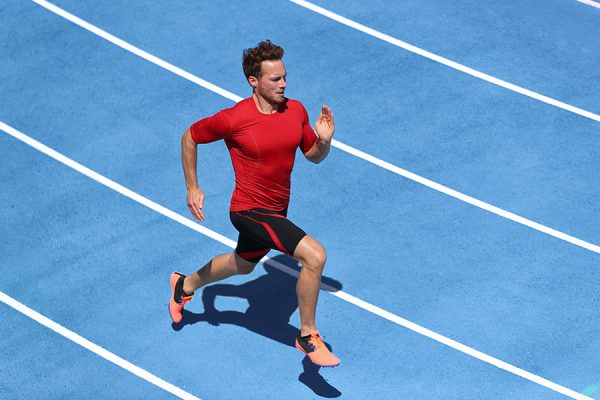 “There are lies, damned lies, and then there are statistics.”
– Mark Twain

In 1994, a study was published in the scientific journal Metabolism by Angelo Tremblay and his team from the Physical activity sciences laboratory at Laval University in Quebec, Canada. Based on the results of this study, you hear personal trainers across the globe claiming that “HIIT burns 9 times more fat than steady state cardio.”

Although it’s usually not stated as such, frankly, I think this is what some trainers want you to believe, because the programs that some trainers promote are based on convincing you of the vast superiority of HIIT cardio and the “uselessness” of low intensity cardio.

In order to get to the bottom of this, you have to read the full text of the research paper and you have to look very closely at the results.

13 men and 14 women age 18 to 32 started the study. They were broken into two groups, a high intensity intermittent training program (HIIT) and a steady state training program which they referred to as endurance training (ET).

The ET group completed a 20 week steady state aerobic training program on a cycle ergometer 4 times a week for 30 minutes, later progressing to 5 times per week for 45 minutes. The initial intensity was 60% of maximal heart rate reserve, later increasing to 85%.

The HIIT group performed 25-30 minutes of continuous exercise at 70% of maximal heart rate reserve and they also progressively added 35 long and short interval training sessions over a period of 15 weeks. Short work intervals started at 10 then 15 bouts of 15 seconds, increasing to 30 seconds.

Long intervals started at 5 bouts of 60 seconds, increasing to 90 seconds. Intensity and duration were progressively increased over the 15 week period.

The results: 3 times greater fat loss in the HIIT group

So where did the “9 times greater fat loss” claim come from?

Well, there was a difference in energy cost between groups, so in order to show a comparison of fat loss relative to energy cost, Tremblay wrote,

Well hold on, because there’s more.

Naturally, lack of weight loss while skinfolds decrease could simply mean that body composition improved (lean mass increased), but I think it’s important to highlight the fact that the research study from which the “9 times more fat” claim was derived did not result in ANY significant weight loss after 15 weeks.

Mind you, THIS IS THE SAME STUDY THAT IS MOST OFTEN QUOTED TO SUPPORT HIIT!

If I said 5 X greater weight loss with steady state, I would be telling the truth, wouldn’t I? (100 grams of weight loss vs 500 grams?) Of course, that would be misleading because the weight loss was hardly significant in either group, because it doesn’t distinguish between weight loss and body composition and because interval training IS highly effective. I’m simply being a little facetious in order to make a point: Be careful with statistics. I have seen statistical manipulation used many times in other contexts to deceive unsuspecting consumers.

For example, advertisements for a popular fat burner claim that use of their supplement resulted in twice as much fat loss, based on scientific research. The claim was true. Of course, in the ad, they forget to tell you that after six months, the control group lost no weight, while the supplement group lost only 1.0 kilo. Whoop de doo! ONE KILO of weight loss after going through a six month supply of this “miracle fat burner!”

Back to the HIIT story – there’s even more to it.

The girths and skinfold measurements in the limbs went down in the HIIT group, but there wasn’t much difference between HIIT and ET in the trunk skinfolds. These facts are all very easy to miss. I didn’t even notice it myself until exercise physiologist Christian Finn pointed it out to me. Christian said,

“When you look at the changes in the three skinfold measurements taken from the trunk, there wasn’t that much difference between the steady state group (-6.3mm) and the HIIT group (-8.7 mm). So, much of the difference in subcutaneous fat loss between the groups wasn’t because the HIIT group lost more fat, but because the steady state group actually gained fat around the calf muscles. We shouldn’t discount simple measurement error as an explanation for these rather odd results.”

“So while this study is interesting, weaknesses in the methods used to track changes in body composition mean that we should treat the results and conclusions with some caution.”

One beneficial aspect of HIIT that most trainers forget to mention is that HIIT may actually suppress your appetite, while steady state cardio might increase appetite. In a study such as this, however, that can skew the results. If energy intake were not controlled, then some of the greater fat loss in the HIIT group could be due to lowered caloric intake.

Last but not least, I’d like to highlight the words of the researchers themselves in the conclusion of the paper, which confirms the effectiveness of HIIT, but also helps put it in perspective a bit:
“For a given level of energy expenditure, a high intensity training program induces a greater loss of subcutaneous fat compared with a training program of moderate intensity.”

“It is obvious that high intensity exercise cannot be prescribed for individuals at risk for health problems or for obese people who are not used to exercise. In these cases, the most prudent course remains a low intensity exercise program with a progressive increase in duration and frequency of sessions.”

In conclusion, my intention in writing this article wasn’t to be controversial, to be a smart-alec or to criticize HIIT. To the contrary, additional research has continued to support the efficacy of HIIT for fat loss and fitness, not to mention that it is one of the most time efficient ways to do cardiovascular training.

I have recommended HIIT for years in my Burn The Fat, Feed The Muscle program, using a 1:1 long interval approach, which, while only one of many ways to do HIIT, is probably my personal favorite method. However, I also recommend steady state cardio and even low intensity cardio like walking, when it is appropriate.

My intentions for writing this article were four-fold:

1. To encourage you to question where claims come from, especially if they sound too good to be true.
2. To alert you to how advertisers might use research such as this to exaggerate with statistics.
3. To encourage the fitness community to swing the pendulum back to center a bit, by not over-selling the benefits of HIIT beyond what can be supported by the scientific research.
4. To encourage the fitness community, that even as they praise HIIT, not to condemn lower and moderate intensity forms of cardio.

As the original author of the 1994 HIIT study himself pointed out, HIIT is not for everyone, and cardio should be prescribed with progression. Also, mountains of other research has proven that walking (GASP! – low intensity cardio!) has always been one of the most successful exercise methods for overweight men and women.

There is ample evidence which says that obesity may be the result of a very slight daily energy imbalance, which adds up over time. Therefore, even a small amount of casual exercise or activity, if done consistently, and not compensated for with increased food intake, could reverse the obesity trend. HIIT gets the job done fast, but that doesn’t mean low intensity cardio is useless or that you should abandon your walking program, if you have the time and if that is what you enjoy and if that is what’s working for you in your personal situation.

The mechanisms and reasons why HIIT works so well are numerous and will have to wait for the next newsletter. It goes way beyond more calories burned during the workout.
Until then, train hard and expect success!

Tom Venuto,
Author of Burn the Fat, Feed the Muscle
Author of The BFFM Guide to Flexible Meal Planning For Fat Loss

About Tom Venuto
Tom Venuto is a natural bodybuilding and fat loss expert. He is also a recipe creator specializing in fat-burning, muscle-building cooking. Tom is a former competitive bodybuilder and today works as a full-time fitness coach, writer, blogger, and author. In his spare time, he is an avid outdoor enthusiast and backpacker. His book, Burn The Fat, Feed The Muscle is an international bestseller, first as an ebook and now as a hardcover and audiobook. The Body Fat Solution, Tom’s book about emotional eating and long-term weight maintenance, was an Oprah Magazine and Men’s Fitness Magazine pick. Tom is also the founder of Burn The Fat Inner Circle – a fitness support community with over 52,000 members worldwide since 2006. Click here for membership details