It’s incredible that I’m reprinting this article about low carb diets that I originally wrote in 2004. Yet it’s no surprise either that this has become relevant and worth sharing again because I’ve seen how some diet fads come and go, but others run in cycles every decade or so… they keep coming back… 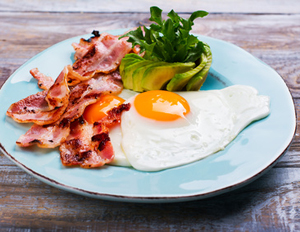 I tried it in various forms on three separate occasions. It worked enough for one successful contest prep, but it simply wasn’t for me (and I went back to standard bodybuilding nutrition).

Then the popularity of keto faded out a bit. It returned in the early 2000’s and that’s what prompted the original version of this article, which got quite a few chuckles (and other reactions) from a lot of readers.

Now here we are yet another decade later, and keto low carb diets are trending yet again – to an almost ridiculous level. But many people who are new in the diet market are acting like it’s a breakthrough. News flash: the low carb, high fat diet is not new. It’s old. It was around before I was born.

And despite all the new science available today that gives us a better understanding of how low carb, high protein or low carb, high fat diets really work, a lot of people are still thinking about it wrong and doing it wrong. Marketeers are taking it to the bank… many consumers on the other hand, are being taken. And that’s why I’m revisiting this one, 14 years later…

Remember that movie with Jim Carey, “Dumb and Dumber?” And remember the sequel to that movie, “Dumb and Dumberer?” Well, the low carb mania that is sweeping the globe today has reached a level beyond dumberer… It’s more like dumberererer (try to say that five times real fast)

There is an epidemic of “low carb stupidity” running rampant among millions of people throughout the world today – and fast food restaurants, food product manufacturers, supplement companies, and weight loss programs are capitalizing on it in a big way!

The low carb diet is not inherently stupid, however. It can be quite beneficial within certain parameters and under the right circumstances. The problem is that many practitioners are uninformed, misinformed, or simply lack the common sense and intuitive bodily wisdom to utilize the low carb approach intelligently.

Many low-carbers don’t even know why they are on a low carb diet, they’re just following the followers. That is not intelligent. Doing what everyone else is doing is always one of the surest, straightest routes to arrive at mediocrity! If you want to be a success, your chances are far greater if you look at what the masses are doing and do the exact opposite!

Fortunately, there is such a thing as “low carb intelligence.” Hopefully, by reading my brief rant today, you will increase your carb IQ, and soon join the ranks of the extraordinarily fit, lean and healthy “carbo geniuses!”

Adjusting your diet approach according to your health status, your goals, your preferences and what’s sustainable for you, not according to generalizations preached by dogmatic diet “gurus.”

Selecting your beer or liquor carefully to make sure you have the brand with the fewest grams of carbs.

Going on a ketogenic diet or any other low carb, high fat diet with no real idea why you’re doing it or how the diet works (going on it because “everybody” is doing it and because you see it advertised and talked about everywhere.)

Studying the physiology and biochemistry of the low carb diet, reading both sides of the research objectively, and understanding all the pros and cons. Then making an informed decision whether to restrict carbs (and how much) based on your own personal goals, preferences, and heath status.

Low carb stupidity #4:
Thinking that extremely low carb dieting is a maintainable “lifestyle” for everyone.

Understanding that reasonable restriction of carbs can be a helpful strategy for fat loss, a good way to reach a peak, and a legitimate method to control hunger. But also understanding that a balanced macro diet of unprocessed foods is probably the most suitable of all the diets for most people for lifelong maintenance, health and happiness.

Believing calories don’t count if you just cut out your carbs (or not counting calories because it’s “too much work.”)

Knowing that fat loss always did and always will boil down to calories in vs. calories out and low carb is often no more than another way to control calories. Taking the time and effort to crunch your numbers (at least once), typing up your meal plan using an app, spreadsheet or nutrition software.

Staying on a low carb diet that has stopped working (or never worked in the first place).

Adjusting your diet composition and macros according to your results; understanding that a common definition of insanity (and/or stupidity) is to keep doing the same things over and over again, while expecting a different result.

Believing that you don’t need exercise because all you need to do is cut carbs.

Knowing that dieting (alone) is the worst way to lose fat and that exercise (including resistance training) is the best way to lose fat while also getting fit, strong and muscular (“Burn The Fat, don’t starve the fat”).

Using the argument, “There’s no such thing as an essential carbohydrate” as a justification for low carb dieting.

Realizing that textbook definitions of “essential” can be taken out of context to promote a fad diet and just because there’s technically no “essential” carbohydrates (as there are essential amino acids, fatty acids and micronutrients) doesn’t mean carbohydrates aren’t important in other respects.

Using the argument, “You have to eat fat to lose fat” as justification for a high fat, low carb diet, without explaining it or putting it in context (exactly how much fat and what kind of fat?)

Understanding the importance of essential fats (good fats), a balanced mix of fats and avoiding refined fats and oils, but not taking any single nutritional principle to an extreme (such as, “If a little fat is good for you then a lot is necessarily better.”)

Avoiding generalizations, and instead, having multiple distinctions about carbohydrates (and other foods) so you can make better choices.

Not clarifying your definition of what low carb means (how low?)

Believing that carrots are fattening because they’re high on the glycemic index and because a popular fad diet book says so.

Have we lost all vestiges of common sense? With an average carrot clocking in at 31 calories and 7.3 grams of carbs, do you really think that this orange-colored, nutrient-dense, low-calorie, all-natural, straight-out-of-the-ground root vegetable is going to make you fat? If so, you are in “carbohydrate kindergarten.”

Realizing that natural, unprocessed foods are one of the keys to healthy, lifelong weight control and that anything highly refined is not an ideal “health” food even if it fits into a particular diet’s macro guidelines.

Forgive me for the obvious bits of sarcasm, but sometimes I can’t help myself and I end up going into rant mode. Seriously though, low carb diets can be a viable option for achieving fat loss goals, if they are approached intelligently, but some of the nonsense still going around the low carb market is nothing short of comical.

To learn about a more balanced method of fat loss which is also personalized, healthy, natural, supplement-free,  and maintainable for life… CLICK HERE